mandriarch ~ founder or leader of a monastic order

So I was sitting at my computer late last night, posting a picture of all the baking I did as my excuse for not getting any writing done, and it suddenly dawned on me that I didn't have a post done for today. So I was faced with a dilemma. It was already close to 2 a.m. so should I stay up an extra half hour or more writing the post, or should I go to bed and write it in the morning, knowing that it means I'll be late posting it.

Obviously I chose the latter. I decided empires will not rise or fall on me getting a post up on time. We'd be in serious trouble if they did. ;-)

It was a crazy busy week last week, and an even crazier, busier weekend. For those of you who aren't on my Facebook, here's a picture of my tiny tree: 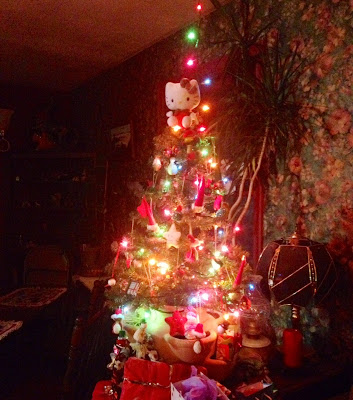 Photo credit goes to the daughter, who took the picture with her phone. I tried to take one with my camera but when I used the flash you couldn't really see the lights. And if I didn't use the flash the lights blurred. It was a really cool effect, but all you really saw were the lights.

And just because I know it's piqued your interest, here's a picture of the cookies I baked yesterday, all chocolate ones for gift baskets: 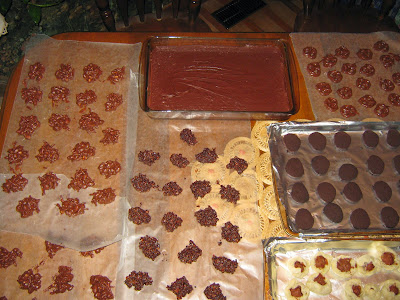 Remember how I said we did most of our Christmas shopping last weekend? Well I think I lied. We spent another four hours shopping this past weekend, and spent another $300. However, we only have two more gifts to buy and then we are officially done. I even got everything wrapped yesterday. Well, almost everything. I'm short two gift bags. Or is it three?

I finished one of the two scarves I needed to do last week and I've made a good start on the second one. I still feel like the first one is too wide, but I am not going to re-do it again. It could also be a little longer, but I'm going to finish scarf number two before I go back to add to scarf number one. I may be crazy, but I'm not insane. ;-)

I actually started out knitting the second scarf, I thought it would be faster. But honestly? I was surprised to see crocheting was faster than knitting in this case. Maybe it was because I was using a half double stitch instead of a single.

I was quite the slacker in the writing department last week, and this week isn't boding any different. On the weekend I started a new story instead of working on either of my two WIP, but I just couldn't seem to help myself.

And Friday I meant to post some Christmas carols but forgot completely. *sigh*

I will in all likelihood post some music videos tomorrow, and this week's chapter of Earth will be moved to Wednesday. Thursday and Friday I'll post some more Christmas music, and then I'm taking a blogging break until January 5.

What I'll be doing during that week, aside from recovering from the holidays, is catching up on my writing and reading, and cleaning up my office and the craft closet. The craft closet will not be as epic as it was in January 2013. I just have to deal with the stuff piling up at the front of the closet, I don't have to pull everything off the shelves and go through boxes.

So I'll just take a moment now to wish you all a very Merry Christmas and a Happy New Year. :-D