It’s been a busy couple of weeks, I tell you what! Summer is well under way with the weather alternating sunny and hot with damp and hotter. I think the hubby has only missed one day of swimming in the pool so far. But for me the best part of summer is road trips.

Last week we took the grandbaby to Reptile World, which is about an hour north of us. This zoo is famous not only for the variety of snakes, turtles and lizards (not to mention the crocodiles and alligators) but for the fact they’re all rescues. One enclosure had 10 -15 alligators, all rescued from some guy’s basement. Seriously! Who in their right mind would keep a congregation of alligators (and yes, that’s the name for a group of them – I looked it up) in their basement? 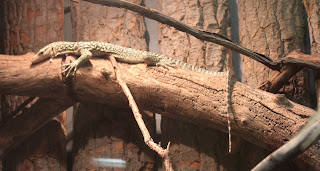 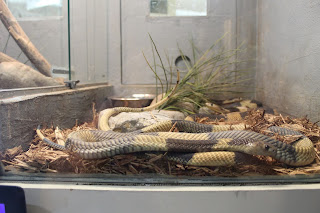 It’s not a large zoo, but there was a lot to see. The reptile house had the snakes, lizards, and turtles, there was a separate building for the crocodiles and alligators, and scattered throughout the property were enclosures for various tortoises. 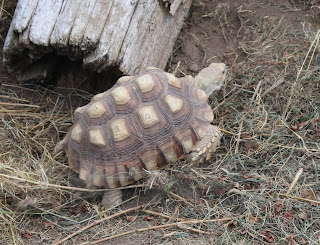 While Ellie loved all the creatures she saw and was particularly fascinated by the crocodiles and alligators, her favourites were the turtles. 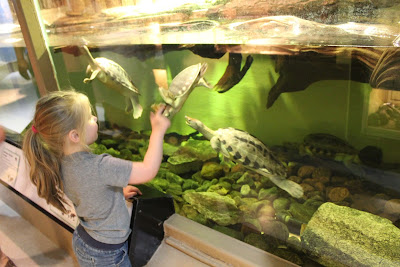 My favourite, however, were the green snakes. I think there were only two of them in the enclosure, but they were super long and were constantly in motion so it was a little hard to tell. 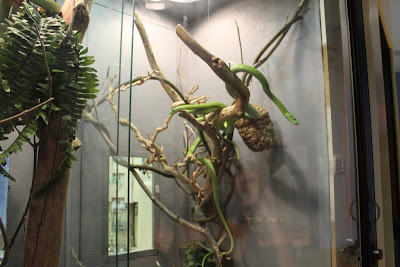 The other big attraction for kids at this zoo are the dinosaurs: 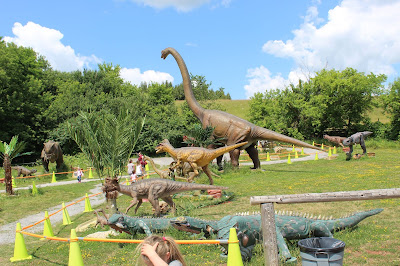 These dinosaurs are all animated, complete with sound. You can’t really tell from the picture, but in this one the grandbaby is roaring back at the dinosaur. LOL 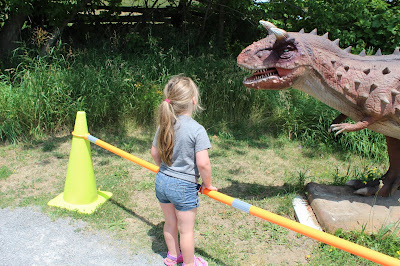 We also went for a hike on a nature trail inside the park and I do mean hike! The path started on a gentle slope into the woods, then got steeper, and steeper, and steeper. Just when we were starting to wonder if it was going to be uphill both ways, it levelled out for a few yards before coming to a very sketchy looking pile of rocks masquerading as a staircase leading downwards.

According to the map, the trail went down, along the edge of a pond, and then looped back up again. We couldn’t really see very far down, and we were in sandals, so discretion being the better part of valour we turned back.

All in all, it was a fun day. It’s no wonder both the hubby and the grandbaby dozed on the drive home. I would have too if I hadn’t been driving. ;-)
at 10:30 AM