Every photographer has their own unique approach for taking pictures, and apparently mine is to take as many possible and hope one (or more) turn out okay. LOL

The first time I went down in the fog, the fog was heavier than I expected and obscured a lot of what I wanted to photograph. Then the battery ran out in my camera and when I went back about an hour later the fog had lifted enough to take the romance out of the landscape. *sigh* Maybe next time

Of all the pictures I took (about 90 all in all), this one is my favorite. I may not always get along with spiders, but there's something magical about their webs, don't you think? 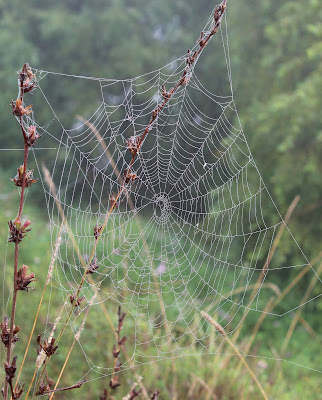 You got me with the spider web. I have always loved how they build webs between stalks of tall grass. In the morning, the dew makes them stand out. I love it. For some reason they make me think of flags of medieval armies.