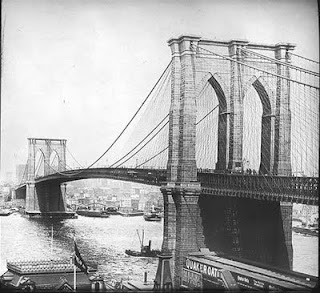 The Brooklyn Bridge connects the New York City boroughs of Manhattan and Brooklyn by spanning the East River. With a main span of 1,595.5 feet (486.3 m), it was the longest suspension bridge in the world from its opening until 1903, and is the first steel-wire suspension bridge.

Plans for a crossing connecting the two boroughs were considered in the early 1800s as a solution to overcrowding in Manhattan while encouraging development in Brooklyn. In 1855, John Roebling proposed a suspension bridge over the East River, but it was not until 1867 that a group of prominent leaders formed the New York Bridge Company "for the purpose of constructing and maintaining a bridge across the East River."

Two years later, in June 1869, the New York City Council and the Army Corps of Engineers approved Roebling's design. When he died as a result of injuries incurred while scouting locations for the bridge, his son, Washington, took over as chief engineer.

Ground was broken on January 3, 1870, and work began on the foundations. The 3,000-ton pneumatic caissons - large, airtight cylinders in which workers cleared away layers of silt in an atmosphere of compressed air underneath the riverbed - were dug 78 feet below the river on the Manhattan side, and 44 feet below the river on the Brooklyn side. To expedite the descent of the caissons, dynamite was used for the first time in bridge construction. The foundations took three years to construct.

Immigrant labourers worked in the subterranean foundations, paid $2.25 per day to work in hazardous conditions without electricity, telephones or other conveniences. Fires, explosions and caisson disease (caused by changes in air pressure that affect nitrogen levels in the bloodstream) took the lives of 20 men and left Washington paralyzed. With the help of his wife Emily, he continued to direct the construction of the bridge from his Brooklyn residence.

Between 1873 and 1877, work continued on the anchorages, towers and cables. The 276-foot neo-Gothic granite towers, which feature two arched portals, were built to withstand strong winds and provide support for rail lines. In August 1876, the two anchorages were linked across the East River for the first time by a wire rope.

In February 1877, work began on spinning the four cables at the Manhattan and Brooklyn anchorages. The four steel cables, which could each hold 11,200 tons, connect the anchorages with the Manhattan and Brooklyn towers, where the cables pass over saddles within the towers. Each main cable, which has a diameter of 15 inches, is comprised of 19 strands containing a total of 5,434 steel wires. Once the spinning of the four main cables was completed in October 1878, workmen strung wire ropes from the cables down to the bridge floor. More than 14,400 miles of wire were used for the suspender ropes. After the suspending ropes and deck beams were in place, the diagonal stays were installed.

Roebling designed the Brooklyn Bridge to have a load capacity of 18,700 tons. He planned to run two elevated railroad tracks, which were to connect to elevated railroad systems in New York and Brooklyn, down the center of the bridge. On either side of the tracks, he designed four lanes - two lanes on two outer roadways - for use by carriages and horseback riders. Directly over the tracks, he provided an elevated promenade for pedestrians and bicyclists. To support the load, and to protect the span from high winds and vibrations, deep stiffening trusses were constructed.

Construction of the bridge under-structure, the stiffening trusses, and the roadway began in March 1879, and continued for four more years. The 1,595-foot main span would be the longest for any suspension bridge in the world, and would be more than 500 feet longer than John Roebling's Cincinnati-Covington Bridge.

On May 23, 1883, President Chester Arthur and Governor Grover Cleveland officially dedicated the Brooklyn Bridge before more than 14,000 invitees. Emily Roebling was given the first ride over the completed bridge with a rooster, a symbol of victory, in her lap. After the opening ceremony, anyone with a penny for the toll could cross the Brooklyn Bridge. On the first day, the bridge carried trolley lines, horse-drawn vehicles, and even livestock.

The Brooklyn Bridge cost $15.1 million to build, $3.8 million of which was to purchase land for approaches and the remainder going toward construction. This was more than twice the original cost estimate of $7 million.

From one end to the other, the Brooklyn Bridge measures 6,016 feet, including approaches. The long river span passes the tower arches at an elevation of 119 feet, gradually rising to 135 feet above the East River at mid-span to accommodate passage of even the tallest ships.

The bridge's cable arrangement forms a distinct web-like pattern, but the most notable features are the two masonry towers to which the many cables are attached. The towers with large gothic arches are 276 ft tall (84 meters), at the time making them some of the tallest landmarks in New York.

In 1964, the Brooklyn Bridge was designated a National Historic Landmark by the federal government and a National Historic Civil Engineering Landmark by the American Society of Civil Engineers. In recent decades, the landmark structure has been refurbished to handle the traffic demands during its second century. The bridge, which now accommodates six lanes of automobile traffic, carries approximately 145,000 vehicles per day. After nearly 120 years, the bridge still has the 44th longest main span among the world's suspension bridges
at 8:00 AM