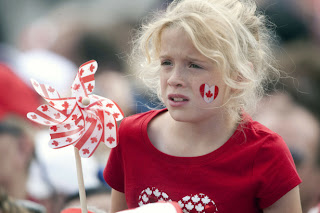 The thing I like best about Canada Day is that Mama always wants to visit her old home town and we always end up in this big park on the waterfront. There's an arts and crafts show there, and games, and stuff going on at the band shell. Mama keeps the twins and Frankie with her to show off to her friends for awhile and I get to wander around by myself. It's really great.

The best thing about this park is its trees. They're not scraggly and dust covered, like we get in the city, these trees are huge. When I was little I used to think that if you climbed to the top of one you could touch the sky.

I think Mama's artist friend, Gordon, must have been to this park. A lot of his paintings have trees like these in them. He was always sketching stuff. He's the one that showed me how to draw. I like drawing but the paper and stuff is expensive. Gordon used to give me paper sometimes. He's gone now, moved away somewhere.

He did a painting of me once, he turned me into an elf. It was really neat, but it didn't look much like me. I mean, the girl in the painting had my long blonde hair and blue eyes, and she was even dressed in my favourite clothes, my purple Northern Reflections sweatshirt and green leggings, the ones I'm wearing today. But the elf Alysha was a lot prettier than me and I don't think I'm so thin. She was looking out from behind a big tree, like the ones in this park. I wonder whatever happened to that picture?

It's really crowded today, but that's okay. I'm used to crowds. And these crowds are better than city crowds, 'cause at least people here say "Sorry" if they bump into you.

Today I decided to follow the boardwalk from one end to the other. I don't know why they call it a board walk, it's made out of bricks, not boards. Anyway, I've already been up to the harbour end of it, now I'm going to the beach end.

There's a lot of crazy people in the water today. Crazy 'cause Lake Ontario is always freezing, even in the summer. Not that I can swim or anything. Can't afford the lessons. We can't afford a lot of things but we do okay. Better than a lot of people we know. Least Mama's not on Welfare.

Uh, oh. I know that tone. If someone doesn't do something about those kids on the toddler slide, one of them's going to start crying.

I wonder where the parents are? There's a bunch of people standing around talking, and there's a lady in a lawn chair with a whole bunch of stuff around her, but she looks more like she's waiting for someone. I guess it's up to me.

"What's the matter?" I ask, going up to the slide.

The three little kids look at me like I'm nuts or something.

The little girl in a pink shorts set starts sniffling again. "Jeffy throwed my ball away."

"Did not Lizzie!" the little boy dressed in green piped up.

"Okay," I said quickly before they started up again. "You can't see from up there, but the ball's just rolled under the slide. I'll get it for you."

It had to be the pinkest ball I've ever seen. I guess Lizzie must have a thing for pink, like Barbie.

"There you go," I said, handing it back to Lizzie.

"Would you play with us?" Lizzie asked. She had a real death grip on that ball.

"Well," I looked around to see if any angry parents were in sight. I can't believe no one's keeping an eye on these kids. Maybe people in a small town don't mind their kids playing with strangers.

"I guess I could play for a little bit. Why don't we take turns with the ball?"

I took the ball back from Lizzie and made them sit side by side on the slide. Mama always said that every one has a special talent, and I guess this is mine. I've always been real good with little kids. I've had a lot of practice with Frankie and the twins. I may only be eleven, but Mama's friend Maisie says I'm real grown up for my age.

I tossed the ball real careful to Jeffy, then Lizzie, then to the little girl that wasn't talking.

"Hold your hands out to catch the ball," I reminded Lizzie. She kept letting it bounce off her chest and giggling.

"No," I reminded Jeffy. He kept trying to steal the ball from the others. "It's her turn now."

If we come here next year, I can bring the twins to this slide. They'll love it. And Frankie can ride the rocket swings.

"Alysha!" Uh, oh. The sound is faint over all the noise, but I'd know it anywhere. That's Mama's voice. I wonder how long she's been calling.