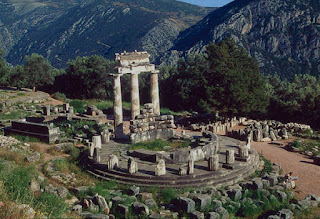 
Pythia, more commonly known as the Oracle of Delphi, was the priestess at the Temple of Apollo at Delphi, located on the slopes of Mount Parnassus. The earliest account of the origin of the Delphic oracle is provided in the Homeric Hymn to Delphic Apollo, which recent scholars date to within 580-570 BC.

It is widely believed that the oracle was originally part of the worship of the earth-goddess Gaia. According to Greek literature, Gaia incarnated in the form of a great serpent, or Python, in order to communicate with her people.

Additionally, many scholars believe that the Python's death at the hand of Apollo symbolized the change in oracles at Delphi. The oracular liaison remained female, even though the deity behind her became male. Thus the Pythia became a vehicle for Apollo's will to be known to those on earth.

Pythia was not one person, but the title of every priestess delivering the prophecies. During the height of the oracle's popularity, as many as three women served as Pythia, with two taking turns in giving prophecy and another kept in reserve.

The women chosen to become the Pythia came from a guild of priestesses at the temple and were required to have led a pure life and be of good character. Although some were married, upon assuming their role as the Pythia, the priestesses ceased all family responsibilities, marital relations, and individual identity.

At the beginning, when there was only one priestess Pythia , the prophecies were given once per year, on the 7th day of Vitsios Month (end of February beginning of March). Later, at the peak time, the oracles were pronounced on the seventh day of each month, except for the three winter months.

Pythia sat on a bronze tripod over a chasm from which vapours rose. The tripod was a ritual offering vessel, the bowl of which is held over a fire. The bowl of the tripod was the space between earth and heaven, joining the mundane and the spiritual worlds and through which divine communion could proceed. The fire of the transmutation, in the Pythia's case, was spiritual rather than material, and perhaps symbolised the rising fumes which caused the Pythia to 'sacrifice' her ordinary humanity and become a vehicle or conduit for the divine to enter the world. The Pythia, inhaling the vapours, entered into a trance, from which she uttered cryptic answers to the questions posed to her.

The tripod was concealed in a secret space, available only to the Pythia. The priests and petitioners remained outside the concealed space, hearing her words when they came forth. Consultations were limited to one day per month, and records indicate that on this day the Pythia was so busy that three shifts were required to handle all requests, and three women were required to be the Pythia in turn.

Until recently it was thought that the Pythia’s supposed frenzied state could not have been induced by toxic gases rising from cracks in the ground because excavations had found no traces of such fissures. However, in 2001 a team of scientists discovered evidence of the presence of ethylene, a potential hallucinogen, in the ancient temple’s local geology and nearby springs. Thus it is believed that ethylene intoxication was probably the cause of the Pythia’s divinatory trances.

Plutarch believed that the Pythia's life was shortened through the service of Apollo. The sessions were said to be exhausting. At the end of each period the Pythia would be like a runner after a race or a dancer after an ecstatic dance. It clearly must have had a physical effect on the health of the Pythia.

The last recorded response was given in AD 393, when the emperor Theodosius I ordered pagan temples to cease operation. During this period the Delphic Oracle was the most prestigious and authoritative oracle in the Greek world, was well as one of the best-documented religious institutions of classical Greece.
at 8:00 AM

Email ThisBlogThis!Share to TwitterShare to FacebookShare to Pinterest
Labels: prophets 4