Well, the holiday is finally, officially over. We had the last family get together on Saturday, and yesterday I took the tree down. The decorations have been put away; all that’s left are the cookies.

As far as 2020 goes, so far I’m not impressed. Not only did the holiday drag out far too long, but on Friday we had to say farewell to another one of our furbabies. Last year around this time it was our oldest cat, Taz, this year it was his son Romulus (Romi for short).

Romi was our basement cat. He liked to sleep in the basement and the last few years he only came up for meals and the occasional nap in the sun. He was large, but sweet natured and the least trouble of any cat we know.

It wasn’t a serious injury (according to the vet we rushed him to) and it healed on its own, but that’s when I bought the bookcases. I couldn’t keep those darned kittens off the railing, but I could at least give them something a little more solid besides the railing to play on.

Romi was sweet, and quiet, and sixteen years old. His health had been declining steadily over the last year or so and when he started refusing food we knew something wasn’t right. Unfortunately, he had a lot more wrong with him than a lack of appetite and the kindest thing we could do was to let him go.

We’ll miss you Romi, especially your brother Date who’s been wandering around the house looking for you.

R.I.P. my old friend. Say hi to your mommy Panda, your daddy Taz, your brother Julius, and your sister Josie when you cross the rainbow bridge. 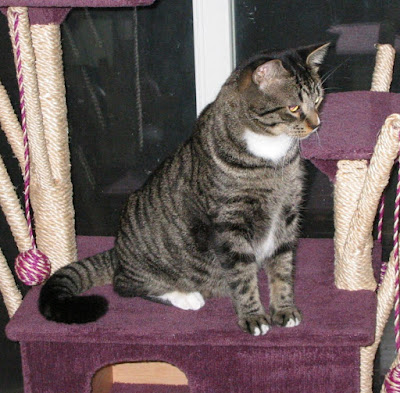