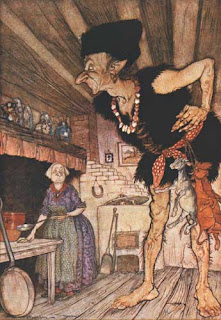 In many cultures, references to ladders and trees that provide passage to the upper world can be found. The Old Testament has tales of the Tower of Babel and Jacob’s Ladder reaching to heaven. The legends of several Northwest Native American tribes have a rope of arrows connecting the earth and sun.

The World Tree of ancient England held up the sky. Yggdrasil, from Nordic legend, is a gigantic ash tree whose branches reach to heaven, while Buddhism has a giant bodhi tree.
The Mayans, Aztecs, and the Olmec believed in a tree that had its roots in the underworld, its trunk in our world, and its branches in the upper world.

Legends of giants, as well, are found in many cultures. Both the Bible and Qur’an have several references to giants who once walked among men. Jewish mythology includes the story of Og, an enormous Amorite king, who was supposedly slain by Moses and his men at the battle of Edrei. In Hinduism the Daityas were a race of giants who defied the gods.

There are the Gigants of ancient Greece, who were the children of Gaia, Mother Earth; the Bagadjimbiri brothers, of Aboriginal Australia, who made mankind; and Kenya’s Mwooka, the creator of mountains and rivers. Chinese mythology includes Pan Gu, who hatched from an egg and became the creator of the universe.

The first print version of Jack and the Beanstalk appeared in 1734, a short burlesque narrative entitled 'Enchantment demonstrated in the story of Jack Spriggins and the Enchanted Bean'. The tale was meant to be read as a criticism of the presence of the supernatural in literature.

In 1807, Benjamin Tabart published a more moral version of the tale. Jack meets a fairy who explains that the giant’s gold, the hen lays the golden eggs, and the magic harp all rightfully belonged to Jack's father, whom the giant has killed. Jack therefore becomes an avenger of his father's death.

In 1890, Joseph Jacobs recorded a version based on the oral versions he had heard as a child, dismissing Tabart’s version. Jack is a good-for-nothing trickster in Jacobs' version while Tabart provides justification for Jack's destruction of the Giant. Both versions have competed for dominance in literary retellings.

The Brothers Grimm drew analogies between this tale and the German The Devil With the Three Golden Hairs, where the devil's mother or grandmother acted much like the wife in this tale: a female figure protecting the child from the evil male figure.

The English version, Jack and the Beanstalk, is the most popular and best known variation of the tale. The events causing the beanstalk to grow, as well as the motivation for stealing from and killing the giant, vary across versions, but the end result is always the same – Jack becomes rich and the giant ends up dead.


Jacobs version
Andrew Lang’s version, based on Tabart
Grimm’s Devil With the Thee Golden Hairs
Jack and the Beanstalk
at 8:00 AM