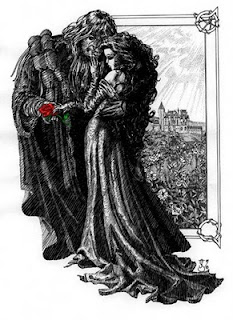 Aarne-Thompson lists 179 tales from different countries with a similar theme to Beauty and the Beast. There are usually three daughters, the youngest being the most kind and pure, her sisters displaying some of the undesirable traits of humankind. Beauty often has no name but is referred to as the youngest daughter.

There never seems to be a mother, which omits the possible quarrel a mother would have allowing Beauty to live with the Beast. It also allows the daughter to have a closer relationship with her father, who is in most cases is well-to-do.

The Beast takes on many forms—serpent, wolf, pig, dog, lizard, etc. His appearance is never appealing, although he is usually wealthy and powerful. Beauty is usually separated from the Beast at some point and it’s her remorse over breaking faith with him that saves the Beast and allows him to transform into a handsome man.

It has been observed by psychologists that the men in the story are all passive, the older sisters are never sympathetic characters, and the youngest woman is always pure and virginal. Even the rose that Beauty’s father plucks is questions. To the Greeks and Romans, the rose is a symbol of pleasure, the flower of romance and worldly delight. It is to be wondered if the father is literally dying or is he dying for the love of his Beauty, who now belongs to the Beast.

When Madame Gabrielle de Villeneuve created her version of Beauty and the Beast in 1740, she was influenced by the story of Cupid and Psyche and other animal bridegroom legends, but the story she came up with was uniquely her own. Her intent was to address issues concerning the women of her day, such as a marriage system which gave women few rights. Often the brides were fourteen or fifteen years old, given to men who were decades older. Failed wives risked being locked up in mental institutions or distant convents.

Women fairy tale writers of the 17th & 18th centuries were often sharply critical of such practices, promoting the ideas of love, fidelity, and civility between the sexes. Their tales reflected the realities they lived with, and their dreams of a better way of life. These varying versions are mirrors of the societies in which they were written, reflecting gender roles, stereotypes, repression, and morality.

Beauty comes to see that under the Beast’s physical ugliness there dwells a beautiful soul. The story and its questions regarding human values run deeper than the simple facts and details of the tale and remain timeless. We all have the potential to be beautiful or beastly we just need to learn how to overcome our monsters.
at 8:00 AM

Email ThisBlogThis!Share to TwitterShare to FacebookShare to Pinterest
Labels: beauty and the beast, fairy tale origins