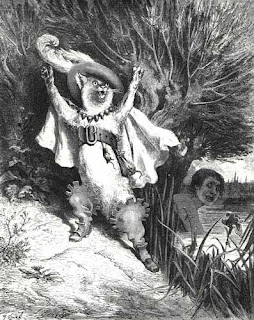 Puss In Boots, classified as tale type 545B by Aarne-Thompson, is probably the most famous of the animal helper tales. Straparola Piacevole published a story about a trickster cat in 1550, which was believed to have been derived from an oral tale. Giambattista Basile also included such a tale in his collection in 1634.

The story has been found in all parts of Europe, across Siberia, India, Indonesia, and the Philippines. It traveled with colonists and travelers from Europe to Africa and the Americas.

In 1695 Charles Perrault published Le Maistre Chat, or Le Chat Botté, (literally the “Master Cat” or "The Booted Cat"). This was a handwritten and illustrated manuscript about a cat who uses trickery and deceit to gain power, wealth, and the hand of a princess in marriage for his penniless and low-born master.

Le Maistre Chat first was translated into English by Robert Samber in 1729. This translation has been described as "faithful and straightforward, conveying attractively the concision, liveliness and gently ironic tone of Perrault's prose, which itself emulated the direct approach of oral narrative in its elegant simplicity."

The tale's immorality has provoked some concern about its influence on young minds. Perrault, a retired civil servant, composed his tales mainly to reinforce standards of civilized conduct in the upper-class French society, rather than to provide amusement for children.

The story is unusual in that the hero doesn’t really seem to deserve his good fortune. As well, although Puss is a king of con artists, he doesn’t appear to have a reason for helping the boy, neither is any reason given for his demand for the boots.

Bruno Bettelheim remarks that "the more simple and straightforward a good character in a fairy tale, the easier it is for a child to identify with it and to reject the bad other."

Amoral tales such as "Puss in Boots" build character, not by offering choices between good and bad, but by giving the child hope that even the meekest can survive.

Children can do little on their own, however fairy tales show them that ordinary events (such as befriending an animal) can lead to great things. It encourages children to believe and trust that even though it may not be recognized at the time, even small achievements can be important.

In the story of Puss In Boots, it is the cat who is brave, ambitious, and intelligent and it is only through his intervention that the hero is able to work up the social ladder. The cat has enough wit and manners to impress the king, the intelligence to defeat the ogre, and the skill to arrange a royal marriage for his low-born master.

George Cruikshank, illustrator of Dickens' novels and stories, was shocked that parents would allow their children to read Puss in Boots. He declared: "As it stood the tale was a succession of successful falsehoods—a clever lesson in lying!—a system of imposture rewarded with the greatest worldly advantages."

Critic Maria Tatar suggests that if the tale has any redeeming quality, "it has something to do with inspiring respect for those domestic creatures that hunt mice and look out for their masters."

The Story of Puss In Boots
Constantino Fortunato by Straparola Piacevole
The Poor Miller’s Boy and the Cat by the Brothers Grimm
at 8:00 AM