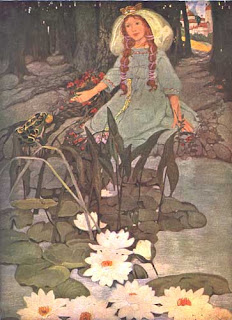 The best known version of the Frog Prince is the tale written by the Brothers Grimm. A princess reluctantly befriends a frog, who demands she keeps the promises she made to him. At the end of the tale, he magically transforms into a handsome prince.

The greatest difference between the tale we are familiar with today and the tale originally penned by the Grimms is the ending. The original breaking of the enchantment had the princess becoming so disgusted with the frog that she hurled him against a wall. In later versions the frog needed only to spend three consecutive nights on the princess’ pillow, and this was eventually changed to the princess bestowing a kiss upon the frog.

The original story, known as both The Frog Prince and The Frog King, dates back to thirteenth century Germany in a Latin version of the tale. In 1549 it appeared in Scotland as a story titled, "The Well of the World's End." An English version was written by Robert Chambers in 1842. He had learned it from Charles Kirkpatrick Sharpe who had heard it in turn from his nurse as a child.

Tales of enchanted frogs, appear in many cultures including China, Sri Lanka and Korea. Versions of this particular tale have been known in numerous countries, from Scotland to Russia. It is believed, however, that the tale gained such great popularity because it is traditionally the first tale presented in the Grimms collection.

Edgar Taylor, who translated the tale in 1823, changed the title from the Frog King to the Frog Prince and revised the ending completely. He replaced the Grimms’ violent resolution with a more passive one. He believed English readers would not accept the ending as it was.

In some versions of the story, princess meets the frog at a fountain instead of a well. Traditionally, good spirits live in wells, which is how the tradition of throwing coins into wells in hopes of having a wish come true came about.

Frogs symbolize new life in many cultures and often appear helpful or kind in folklore. However, frogs also have connections with witchcraft, often as witches' familiars, and are despised by some religious groups for that reason.

Frogs are also animals involved in natural transformations as they progress from tadpoles to frogs. The frog's transformative nature makes it an acceptable animal to transform into a prince at the end of the story.

The story as one about sexual maturity and acceptance of a marital relationship is more explicit in the earliest Grimms manuscript of 1810. In this version, the frog's desire to sleep with the princess is overt and not hidden in the details. The frog makes no pretense of wanting material possessions despite the princess' desire to pay her debt with her riches.

The prince is a somewhat puzzling figure. There is no version of the story that explains why the witch cast a spell over him to turn him into a frog. Was he being punished for some misdeed? Was he an innocent victim?

In the end, we have the moral that one should always keep a promise. The princess is rewarded by the frog transforming into a prince, whom she marries. One has to wonder whether she deserves such a reward after the way she treated the frog, but of course they live happily ever after.

For several different versions of The Frog Prince, go HERE
at 8:00 AM