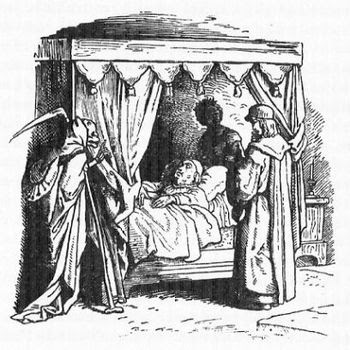 There once was an old man who had twelve children that he could barely care for. When a thirteenth child was born, the man was determined to find a fitting godfather for the boy. After rejecting God, who favours the rich over the poor, and the Devil, who deceives men and leads them astray, he was approached by Death. Because Death takes both the rich and the poor, making all men equal, the man decided he was the perfect choice for a godfather.

Some time after this the king’s daughter became ill. Again the physician tricked Death but this time Death would not forgive him and took the physician in her place.

Death is a very common feature in fairy tales, especially in the tales of the Brothers Grimm. Many stories begin with the death of one or both of the hero's parents. Death in childbirth was far more common in centuries ago, and the prevalence of step–children and orphans in fairy tales reflected a social reality.

Many of these tales (in their pre–Victorian forms) were exceedingly violent — even those gathered by the Grimms in editions published for German children. Though the Grimms were known to have edited their fairy tales to remove traces of sensuality and moral ambiguity, they had no such qualms about leaving much of the worst violence intact. Murder, cannibalism, and infanticide are staples of the fairy tale genre.

In Godfather Death, Death is not the protagonist, but a secondary character who remains constant throughout the story. His presence demonstrates that death is a part of life and is always around. Death does not discriminate, it strikes both the rich and the poor and is something everyone in the world must deal with.

Although Death is usually considered evil, he is seen here as a father figure, taking care of his Godson as if he were his own. Death is chosen as the godfather because of his sense of social justice. He makes the boy rich, gives him gifts and he even allows him to cheat death, once. By making Death human, the Grimms Brothers are demonstrating that Death is not something to fear.

Godfather Death shows child readers that they should not fear Death, as it is not as scary as they might think. By making the Grim Reaper friendly and fatherly, the Brothers Grimm succeed in explaining that, although Death is a part of everyone’s life, it is nothing to be afraid of.

Godfather Death
additional versions
at 8:00 AM