7 Wonders of the Natural World - Part I 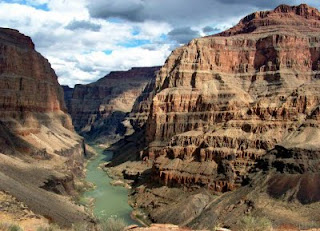 The Grand Canyon is known for its visually overwhelming size and its intricate and colourful landscape. Geologically it is significant because of the thick sequence of ancient rocks that are beautifully preserved and exposed in the walls of the canyon. These rock layers record much of the early geologic history of the North American continent.

Located in the state of Arizona, the Grand Canyon is 277 miles (446 km) long and from 4 to 18 miles (6.4 to 29 km) wide. Nearly two billion years of the Earth's geological history have been exposed as the Colorado River and its tributaries cut their channels through layer after layer of rock while the Colorado Plateau was uplifted. Recent evidence suggests the Colorado River established its course through the canyon at least 17 million years ago. Since that time, the Colorado River continued to erode and form the canyon to its present-day configuration.

The Grand Canyon is considered one of the natural wonders of the world largely because of its natural features. The exposed geologic strata rise over a mile above the river, representing one of the most complete records of geological history that can be seen anywhere in the world. Geologic formations found at the bottom of the Canyon date back 1,800 million years.

The entire park area is considered to be semi-arid desert, but distinct habitats are located at different elevations along the 8,000 foot elevation gradient. Near the Colorado River, water vegetation and sandy beaches prevail. Just above the river corridor a desert scrub community exists complete with a wide variety of cacti and warm desert scrub species. A pinyon pine and juniper forest grows above the desert scrub up to 6,200 feet, while between 6,200 feet and 8,200 feet ponderosa pine is abundant. On the North Rim at elevations above 8,200 feet, a spruce-fir forest tops out the park.

Before European immigration, the area was inhabited by Native Americans who built settlements within the canyon and its many caves. The Pueblo people considered the Grand Canyon ("Ongtupqa" in Hopi language) a holy site and made pilgrimages to it. The first European known to have viewed the Grand Canyon was García López de Cárdenas from Spain, who arrived in 1540.

More than 200 years passed before two Spanish priests became the second party of non-Native Americans to see the canyon. U.S. Army Major John Wesley Powell led the 1869 Powell Geographic Expedition through the canyon on the Colorado River. In the late 19th century, the promise of mineral resources—mainly copper and asbestos—renewed interest in the region. The first pioneer settlements along the rim came in the 1880s.

Early residents soon realized that tourism was destined to be more profitable than mining, and by the turn of the 20th century the Grand Canyon was a well-known tourist destination. In 1901 the Grand Canyon Railway was opened from Williams, Arizona, to the South Rim, and the development of formal tourist facilities, especially at Grand Canyon Village, increased dramatically.

It was first afforded federal protection in 1893 as a forest reserve. President Theodore Roosevelt visited the Grand Canyon in 1903. An avid outdoorsman and staunch conservationist, he established the Grand Canyon Game Preserve in 1906. Roosevelt added adjacent national forest lands and re-designated the preserve a U.S. National Monument in 1908. Grand Canyon National Park was finally established as the 17th U.S. National Park by an Act of Congress signed into law by President Woodrow Wilson on February 26, 1919.

Today the Grand Canyon can be explored on foot through traditional hikes, day hikes, or extended backpacking trips. You can also explore the canyon on the back of a mule. This provides a unique experience of the canyon while allowing the mule to carry the load. The floor of the canyon can also be explored by taking a white water rafting trip. There are a variety of trips offered depending on the type of experience someone is seeking and their rafting skill level.
at 8:00 AM