Time For the Official Announcement!

I did it! I crossed the line from aspiring author to author. My first novel, An Elemental Wind, is now out there for all the world to see . . . and better yet, to purchase! :-)

Special thanks to Jamie DeBree of Brazen Snake Books for her tireless work in making my dream a reality. I also want to thank Heidi Sutherlin of My Creative Pursuits for the awesome cover – once you’ve read the book yourself you’ll see how dead on she was in depicting the main character – she’s so accurate it’s scary. 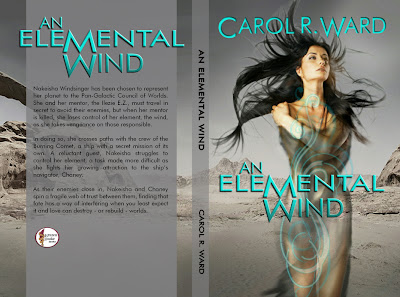 Nakeisha Windsinger has been chosen to represent her planet to the Pan-Galactic Council of Worlds. She and her mentor, the Ilezie E.Z., must travel in secret to avoid their enemies, but when her mentor is killed, she loses control of her element, the wind, as she takes vengeance on those responsible.

You can purchase it through Brazen Snake Books (where you can also read the first three chapters for free), or Amazon. It’s also available from Smashwords, and the print edition (which will be released on October 14) will also be available from Barnes and Noble.

And for those of you who came here to read this week's installment of Fire, which, incidentally, is the second of the Ardraci Elementals series, I promise to have it up later tonight . . . tomorrow at the latest. ;-)
at 8:00 AM