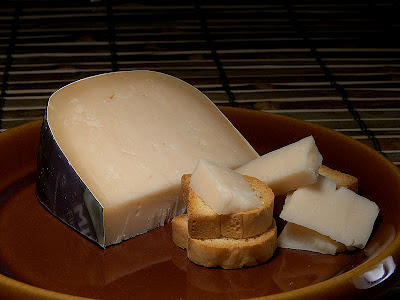 Gouda is one of my favourite cheeses for just snacking on. It's a fairly mild, semi-soft cheese with a taste that can range from mild to sharp, depending on its age.

It's probably the most famous Dutch cheese, accounting for 60% of the cheese produced in Holland. The younger Gouda is mild, sweet and fruity, while mature Gouda (aged 18 months or more) darkens in colour and develops a slightly harder texture with a more intense flavour. Gouda that has been aged for two years or more is almost brittle in texture and has a nutty, almost cheddar like flavour.

Though some varieties are made from goat's milk, Gouda is usually made from cow's milk and the colour ranges from almost white to light butterscotch, depending on the age. Because it's a semi-firm cheese it usually comes wrapped in a wax rind. You can also find Gouda smoked, or with herbs, spices, or peppers added to it.

The first settlers in the Netherlands were already making cheese, but it was not until the Middle Ages they began to export it. By the 17th century Holland was known as a "cheese country".

Holland is a country well suited to the dairy industry because of their wet soil which is excellent for milk production. Like many cheeses, Gouda is named after a town, in this case the bustling market centre for the cheese trade in the area. Today there is a cheese weigh house dating back to 1668 that stands as a tribute to this most famous of Dutch cheese, and tourists still visit for ceremonial cheese weighings.

Unlike most cheeses, Gouda has a sweet undertaste to it. This is accomplished by a process called "washing the curd". The milk is cultured and heated to produce the cheese curds, but then some of the whey is drained off and replaced with hot water. The curds are then pressed into circular molds for several hours. Next the cheese is soaked in a brine to give it a rind and then allowed to dry before receiving its waxed coating. It is then aged for anywhere from a month to several years, depending on the desired result.

While I like Gouda on its own, it also goes well on dessert platters, in sandwiches, and at wine tastings as a palate cleanser. It's a popular breakfast treat and is great with dark grained breads or fruit. It also grates easily and melts with no trouble to be used over baked potatoes, or in macaroni and cheese, or as a substitute for cheddar in your favourite recipes.


If you'd like to try making your own Gouda, I found two videos with step by step instructions: the first is from New England Cheesemaking, and the second is from Made Man.

If you prefer to buy your cheese, you can find Gouda cheese in the deli section of your favourite grocery store, or you can buy it online. In Canada I recommend Gort's Gouda and in the U.S. you can try Scray Cheese Company.