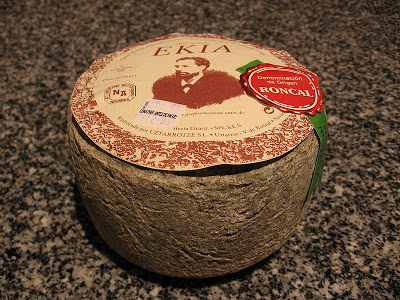 When I think of Spain one of the last things I think about is cheese. Imagine my surprise when I discovered Spain produces a great deal of cheese, the most famous of which is Roncal cheese.

Roncal cheese is a pale yellow in colour and sometimes has small holes or cracks in it. Younger cheese is moist and smooth with a slightly nutty flavour. As it ages, the colour deepens and the cheese develops a stronger tang to it. What gives Roncal its unique flavour is the fact it's made from sheep's milk.

Records of the making of this cheese go back to the thirteen century. Seven villages in the Roncal Valley of Navarra banded together to create it from the milk of the Lacha and Aragonesa breeds of sheep. The time-honoured hand crafted methods of making Roncal are closely guarded secrets, unwritten and passed down from generation to generation.

Another defining feature of Roncal is that the milk is not heated during production. The sheep's milk is curdled by the addition of rennet and then the curds and whey are separated. The curds are poured into moulds that allow for further drainage, and then pressed. Once the pressing stage is complete the cheese is removed from the mould and submerged in a brine for about thirty hours before being removed for aging.

Roncal cheese works well as either an appetizer or a dessert cheese. It should be eaten at room temperature to enjoy the full flavour and is best served with red wine. You could also try grating it for use in soups, casseroles, or pasta.

To my surprise, I actually came across a recipe in case you'd like to try making your own Roncal Cheese. It can be found HERE at the Cheese Forum. But just remember, true Roncal Cheese can only be made in the Navarre region of Spain. While it's not likely you'll find Roncal Cheese in your supermarket, in the U.S. you can buy it at Artisanal Cheese or Gourmet Sleuth. In the U.K. you can find it at ibergour.com.uk