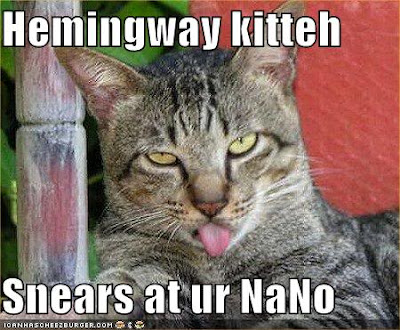 Yeah . . . so I'm way behind at this point. Thousands and thousands of words behind. Not as far behind as some people on my buddy list, but far enough to cause slight concern.

The worst part is that I really don't have a good excuse except for the weather. We've had an unnatural abundance of grey and overcast weather lately and it's put me in hibernation mode. All I want to do is nap.

I checked my numbers for last year and discovered that I was behind every day except four of them last year. Day ten I was ahead by 322 words, and then days 28, 29, and 30 I wrote an impressive 13,669 words for the win.

I don't want to do that this year. I want to catch up over the weekend and then go slow and steady to win the race.

Once again, here's the list of my fellow NaNoers from Absolute Write. Please check them out and leave a word of encouragement in the comments. 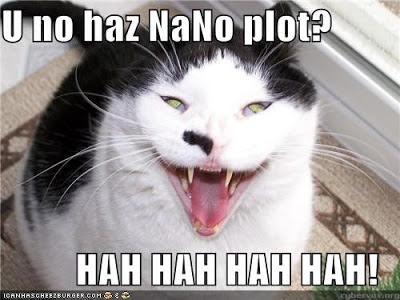 If you'd like to see the previous excerpts from my NaNo, we have Week One and Week Two.

This week's excerpt is pretty self-explanatory. Back in the real world, Jessica's friends are talking about her situation.


Howard sighed as there was a knock on the door to his apartment. There was only one person who would be bothering him at this time of night.

Ellen was Jessica's other best friend, and room mate. She'd been making his life miserable since Jessica's disappearance. It's not like he meant to send Jessica into another universe, nor was it his fault that Paranithel and Thackery enhanced his spell. But she still held him responsible.

"How's Jessica doing?" she asked, by way of greeting.

"Poor Jess, she's never been what you'd call outdoorsy." Ellen went over to his coffee maker and helped herself to a cup of his favourite, and most expensive blends.

"Help yourself," he said. "At least she's got some company now."

"She accidentally turned some guy into a dog."

"What?" Ellen choked on a mouthful of coffee. "What did you say?"

Howard grinned. "Someone disturbed her sleep last night and without even thinking about it she changed him into a dog."

"Howard! That's not even remotely funny!"

"Oh, chill Ellen. It won't be hard to change him back, she just has to wait for a month."

"That's not what I'm talking about, you idiot!" Ellen paced, short angry strides. "First of all, this just proves she's not safe on her own! He could have just as easily slit her throat while she slept. And then there's the whole 'accidentally' thing. You need to teach her how to control her magic."

"Yes, you. You've been studying magic since you were a little kid. Jessica told me so. All you've lacked is the power."

"Screw Thackery! You need to teach her at least the basics, a modicum of control, or who knows what she might unleash!"

"All the more reason that she learns to control it. And maybe you could add a couple of lessons in using magic for defence. She's been really lucky so far, but one of these days her luck is going to run out."

"I guess you have a point," he said slowly.

"Of course I do," she said. "Now, have you got an biscotti to go with this coffee?"