thanskgiving ~ Thanksgiving Day is a national holiday celebrated primarily in the United States and Canada as a day of giving thanks for the blessing of the harvest and of the preceding year. 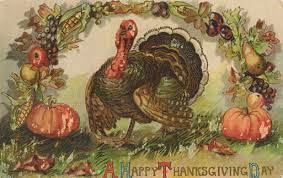 Seeing as it's Thanksgiving, therefore a holiday, I thought a little trivia might be in order. :-D

The Canadian Thanksgiving has been celebrated on the second Monday in October since 1931.

Algonquin Indians were among the first to harvest wild cranberries. They used them as food, medicine, and a symbol of peace.

The tradition of breaking the wishbone dates back to the Etruscans of 322 B.C. The Romans brought the tradition with them when they conquered England and the English colonists carried the tradition on to America.

While pumpkin pies are a staple of many North American Thanksgiving meals, the pies weren't popular in Thanksgiving dinners until the early nineteenth century, according to The Oxford Encylopedia of Food and Drink in America.

The cornucopia, often associated with Thanksgiving, is a symbol of abundance and nourishment. The horn-shaped container typically contains produce, flowers, nuts, or wealth in some form

Canadians purchased three million whole turkeys for Thanksgiving in 2011, according to the Turkey Farmers of Canada - about 32% of all whole turkeys sold during the year.

Thanksgiving is a statutory holiday in Canada, except in P.E.I., Newfoundland and Labrador, New Brunswick and Nova Scotia.

Thanksgiving was first celebrated in Canada when English explorer Martin Frobisher held a feast in what is now Newfoundland to mark his safe arrival to the New World in 1578.

And here's another one 'cause today's a holiday and you have nothing better to do. ;-) Happy Thanksgiving Quiz

But it's not just a holiday for Canadians. Our Yankee friends to the south get the day off too. They get to celebrate: 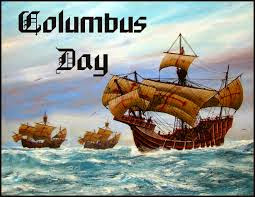 So just to be fair, I had to look up a little trivia about Columbus Day too.

The day, as the name suggests, honors Christopher Columbus and his arrival in the Americas.

While the federal holiday is called Columbus Day in the United States, it is called Día de la Raza ("Day of the Race") in many Latin American countries.

Christopher Columbus wasn't the first European to find the Americas, as he set foot on islands in the Bahamas. Technically, Columbus never entered North America and never knew he discovered a continent.

The region is believed to have been discovered 500 years before Christopher Columbus' birth by Norse explorer Leif Erikson.

In the United states, four states do no recognize Columbus Day. Those states are Hawaii, Alaska, Oregon and South Dakota. Instead, Hawaii celebrates Discoverers' Day, South Dakota celebrates the day as Native American Day and Oregon does not recognize or commemorate the day. Other states, like Nevada and Iowa, do not celebrate the day as an official holiday.

There is a movement to replace Columbus Day with Indigenous People's Day. The city of Berkeley, in California, has been celebrating the day as such since 1992.

No matter what holiday you're celebrating today, have a good one!