malism ~ the belief that the world is evil

Have you ever noticed that I seem to have a disproportionate amount of bad luck?

Friday this little red light that looks like a car battery lit up on the dashboard as I was driving to the gym. It came and went but disappeared each time so I just thought maybe the battery was cold or wet or something. Silly me.

When I was taking the hubby to work later, the light came on and stayed on. This was not good. And it stayed on pretty much the whole time I went to pick the son-in-law from work, which is the far side of town. I dropped him off and still had to go halfway across town to get to the car place, crossing my fingers the whole way so the car wouldn't die before I got there.

It didn't take the car guy long to determine that we needed a new alternator. Yikes! And it also meant they'd have to go searching for the part, so one of his minions gave me a ride home where I could think in comfort about all the errands I'd intended to run.

Late in the afternoon the car guy called with the extra bad news that they couldn't get the part until Monday. Have a nice weekend.

Meanwhile, hubby's stuck at work. Our car is a Ford Escape, which is technically a truck, and he need's the height of its seats because of his bum hip. Fortunately our daughter drives a Jeep, which is almost as good, but he was still somewhat at her mercy, although he did exert his fatherly influence to make sure she stopped at the liquor store for him. ;-)

But Friday is also the day I grocery shop, and we were low, if not completely out of, some of the things we depend on having. Important things, like coffee creamer. So Saturday, I got the brilliant idea of walking to the nearest grocery store to get a few supplies to tide us over. The walk to the store wasn't bad, but the walk home, with a bag of groceries in each hand, was a tad painful. Not, as you might be thinking in my legs or feet, but in my arms.

As you may recall, a couple of months ago I stopped working out with the weights because of pain in my thumbs, forearms, and left elbow. Well, apparently I wasn't as recovered from that as I thought because my thumbs are hurting and my left arm is not a happy camper.

However, Saturday was extremely windy and rainy, and I made it to the store and back with only a few drops of rain hitting me. So I guess it could have been worse. Maybe my luck isn't entirely bad, eh?

After two weeks of beautiful sunny, but cool, autumn weather, it appears autumn has turned on us with a vengeance. The weather turned cold and overcast, and the last few days has been windy on top of that.

How cold is it? It's cold enough that the windows are shut - even the one in the upstairs bedroom - and the furnace even came on one morning. It's socks and shoes weather. Jacket weather - you know, the jacket I left in the back of the car, which is still at the car place.

But it was a good week to stay in and get some writing done. There were many words written on Lucky Dog, and believe it or not I also did some writing ahead on Earth. There's a lot of major stuff that has to happen in both these stories, so the betting is open as to which I'll finish first.

No knitting or crocheting to report, and very little reading. I did get out one day and make an attempt at taming the wild mess the garden around the pond has become, and I pulled all the garlic chives that migrated from my neighbor's garden into my rose garden. And I actually made some progress on the book nook.

I've pretty much cleared out the upstairs bookcase and catalogued the books, but just when I thought I was done I started finding books in other parts of the house. So I added them in and there's still a few lurking about in places they shouldn't be. And now that I have them about 90% all in there, I'm noticing that there are a few oversized hardbacks that stick out like a sore thumb.

This is going to bug the crap out of me, so now I'm faced with the dilemma of what to do with them. Do I just put them altogether on a bottom shelf? an upper shelf? Or do I put them in another bookcase altogether, which kind of defeats the whole "all the science fiction and fantasy in the nook" thing. Although, I'm not putting my Neil Gaiman or Charles de Lint books in there . . .

Guess it's something else I'll have to consider. In the meantime, here's what the nook is shaping up to look like. The books that are lying on their sides are the ones that still need to be inserted in their rightful place - once the sleeping cat moves. ;-) 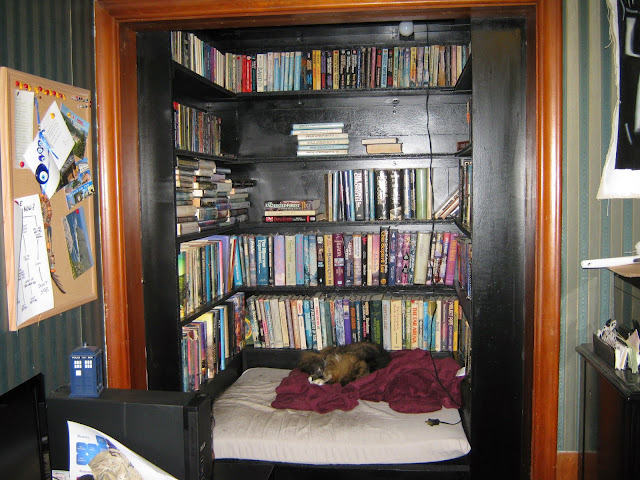 And just so you know, the tardiness of this post wasn't completely my fault. It's another grey day today and the internet was down for a while. Guess it serves me right for not getting this done last night. :-D