Where do I start? *shakes head sadly*

Let's start with the weather, which kind of skipped over spring and went straight to summer. We had a few record-breaking high temperature days towards the end of the week. And with the nicer weather we have the birds returning to serenade us. Like this guy: 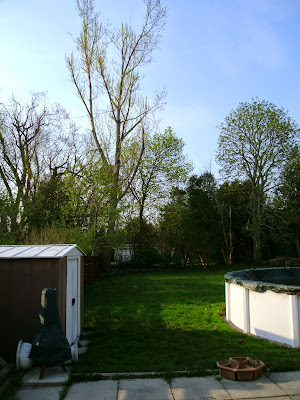 This tree is at the very back of our yard. And in this tree is a robin, who apparently has an app on his phone that lets him know when sunrise is, because even on overcast days he starts his damned chirping at sunrise and keeps it up until mid-morning. I swear if I had a sling shot I'd be using him for target practice!

Can't spot him? Let me help: 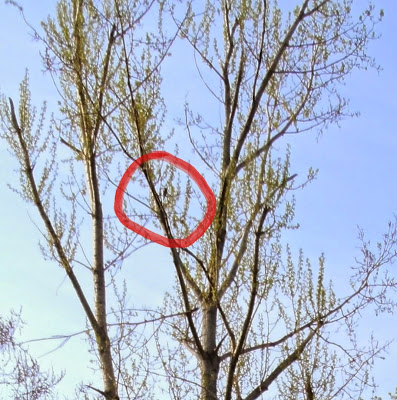 Chirping should not be allowed in the morning until I've had a coffee!

Last week was pretty unremarkable. Mostly what I did was edit Lucky Dog, which you can read about HERE.

Sunday, of course, was Mother's Day, which was kind of a mixed bag for me. I was all set to have a relaxing morning of painting, only to discover I had everything I needed . . . except the actual paint. So after a family brunch, we stopped at Staples where I picked some up, and for a $5 donation to the Special Olympics, I received a Mother's Day gift bag that had a really nice message pad and a can of cinnamon coated almonds.

My pleasure in the gift lasted until I got home and tried one of the almonds. I think the cinnamon must have been mixed with cement, because I bit into one and broke a tooth to the point where I don't think the dentist will be able to save it. And we were having corn on the cob for supper. *sigh*

Still, it wasn't all bad. I had a visit from my little Ellie-beans and got to read her a story: 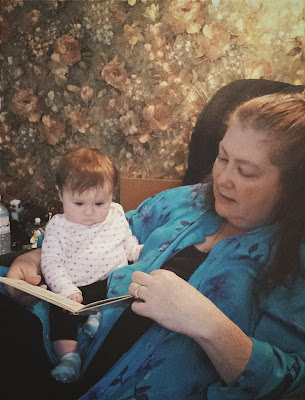 And remember my old friend, Blackie the squirrel? He left a Mother's Day present for me in the front garden: 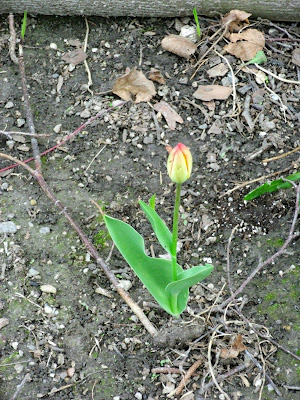 So it looks exactly like the tulips in my next-door-neighbor's garden. It's the thought that counts. Right? ;-)

And I got a bit of a chuckle out of Dante's unique solution to the "Nook War" he and Taz are waging. They both like the book nook and neither are willing to share. 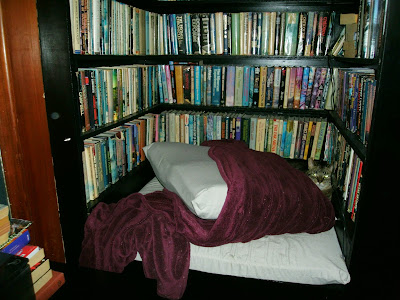 And finally, my orchid has six - count 'em - six blooms open! And there's still more buds on the end of the stalk! So beautiful! 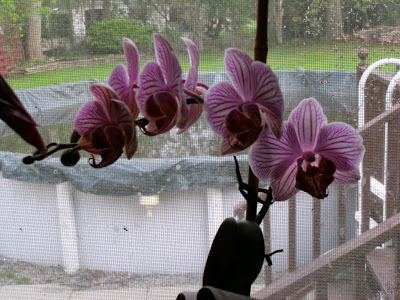 So all in all, I'd say the good out-weighed the bad yesterday. At least that's what I'll keep telling myself until I visit the dentist. ;-)