Monday again, eh? And so soon, too.

Last week was pretty darned cold. How cold was it? It was so cold we got frost one night and it pretty much killed the hanging plant I got for mother's day last weekend. 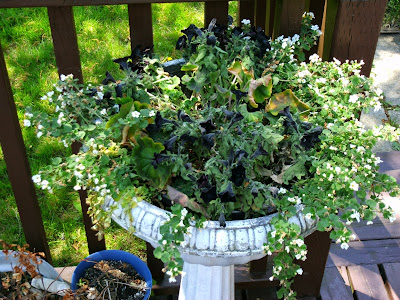 Frost! With only one week to go until June. I know Canada has a reputation for being cold and all, but this is ridiculous! I'm just really glad I haven't bought any annuals for my front garden yet. Maybe next weekend.

And in true Canadian fashion . . . Saturday was so cold I was wearing my NaNo hoodie and contemplating turning the heat on, and Sunday was warm enough that I had the deck door open.

I have only myself to blame.

A couple of weeks ago it was so warm that I finally broke down and bought some capris length leggings to wear for my work outs. I wore them once and just about froze when the weather turned cold again.

So then last weekend was enough that I was thinking of transitioning to skirts instead of pants and I got the urge to paint my toenails. They're a nice subtle shade of pink, but they've been covered up ever since the polish dried because it turned even colder than the preceding week.

This week is supposed to start warming up (between rain showers) but I'm not going to take any chances. I'll stick to wearing layers and I'll avoid freshening up my toe polish.

Fortunately, although last week was cold it was bright and sunny, so my orchid is doing well. I have another bud open, bringing the number of blossoms on the bloom stalk to eight. EIGHT! And it looks like the last two buds will be opening this week. 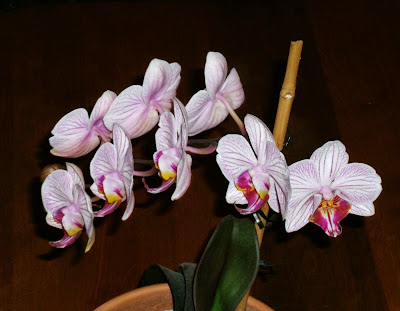 I can't believe I'm going to have an orchid with ten blossoms on its bloom stalk. Just call me the orchid whisperer. :-)