mesocracy ~ government by the middle classes

If you live in Canada, chances are you have the day off. Happy Civic Holiday!

If you live anywhere else, so sad, too bad. Apparently it’s only a Canadian thing.

Last week is pretty much a blur. Transcribing and more transcribing with the occasional break for babysitting. The deadline for the transcriptions was self-imposed, but to be perfectly honest I should have set myself one a long time ago. I work better with a deadline, a fact that’s easy to forget when you’re self employed.

Babysitting was actually a nice break. Perhaps not a relaxing break, but they say a change is as good as a rest. And I know the secret to dealing with small children -- keep them busy. I had an aunt who also knew this secret. She had a house full of antiques and never baby-proofed it. That’s because she always had a new craft for us to try out at the kitchen table. Crafts, picnics, and car rides - the way to any child’s heart.

Being only 18 months old, the grandbaby is kind of limited to the crafts she can do, although she’s eager to try. Her mother got us a piece of bristol board, some stickers, and some washable markers. Below is our first attempt. Unfortunately, I didn’t get a picture of our second attempt where she had more fun drawing on herself with the markers instead of the bristol board. 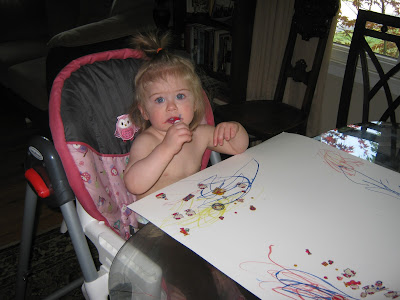 Lest you think I was all work and no play last week, we did take a break on Saturday to go to the Ripley Aquarium in Toronto. And by we I mean everyone - hubby, daughter, daughter’s hubby, and grandbaby. We drove as close as we dared to the big city, and then took the GO train the rest of the way.

Although grandbaby lives near the train tracks, she’s never been on a train before, so that was pretty exciting for her. AND we didn’t realize that Carabana was also going on, so there were several costumed young ladies on the train as well. Such elaborate costumes that covered so very little. The grandbaby took one look at all the feathers and started going “Ack, ack!”, which is her sound for all birds. The ladies thought she was adorable.

We met up with more family and had a great time at the aquarium. It was so much bigger than I thought it would be and for a good part of it you followed a path that took you under the tanks of fish so you had sharks and rays and a myriad of other fish swimming over you. So cool! Here’s a picture of the grandbaby and her daddy crawling through one of the kids tunnels. 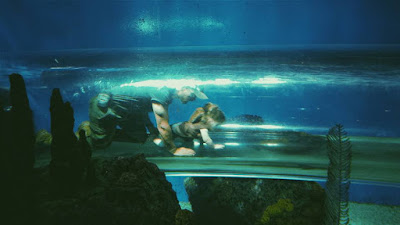 And now, a new week has begun. The transcription project is all but done and I have a babysitting free week to help things get back to normal.

Sounds like a great outing with family. There are some things which are so much more fun with children. Cheers.

Definitely Ann! And the little one was a real trooper, despite very little nap time. Grandbabies are the best! ;-)