maschalephidrosis ~ massive sweating of the armpits

Continuing on the theme from last week of mother’s curses . . . The daughter had another convention she had to attend last week, so I put in some extra babysitting time. But unlike the previous week, this time I had the use of the daughter’s car, and more importantly, the car seat.

Wednesday was story time at the library and I figured it was the perfect opportunity to get out and be sociable. Unfortunately the woman in charge of the program was not very friendly and the kids were kind of standoffish. So afterwards we indulged in a little shopping therapy to make us feel better. :-)

Thursday we decided to give the drop-in playgroup at the YMCA a try and had a much better time. 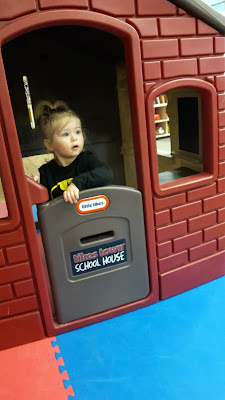 The people running it were friendly and welcoming. There were just enough kids to make it interesting and an endless supply of toys. The grandbaby’s favourite was the playhouse in the picture. And the small, indoor slide. It may take some finagling with the car seat, but we’ll definitely be going back again.

In fact, there’s a Halloween party there today that we’re planning to attend. And yes, I’m dressing up too. If I can find my witch’s hat. Grandbaby, of course, will be wearing the Ewok costume her doting Grammy made her. 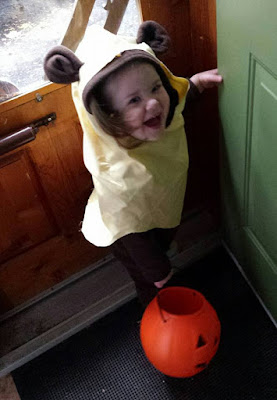 It’s not the best picture of the costume, but the smile says it all.

On the weekend I finally started catching up on my book reviews so I could log the books I’ve read into my Goodreads account. Fourteen down and six to go. I’ve been meaning to do this since July, and to keep better track. Like, update once a month or so.

I’m not sure if I’ve mentioned it here or not, but I’ve decided to do NaNo this year. NaNo, for those of you who are new, is short for NaNoWriMo - National Novel Writing Month. The idea is to write a 50,000 word novel during the 30 days of November.

This will be my tenth year, but my eighth win (if I complete the challenge). I did not win the very first year I did it - my story ran out at 30,000 words and try as I did, I just couldn’t make it any longer. And I didn’t do it last year, and really missed it. It just didn’t seem like November without those massive word counts.

To be perfectly honest, the writing hasn’t been going well lately. I haven’t been writing much of anything, other than blog posts. And yet I’m starting to feel pretty excited about NaNo. I’ve even ordered a NaNo tee-shirt online - this will be my third one, but I’ve already got the thermos, travel mug, hoodie, and USB bracelet.

There’s just something magical about NaNo, although you really can’t understand it unless you’ve tried it. But it’s so magical that I was even able to persuade three out of four friends (who’ve done it before) to join me.

Tomorrow night I’ll be attending a write-in being thrown by our official Municipal Liaisons and hopefully I’ll be meeting other like-minded writers. I may end up being a crazy person for the month, but it’ll be fun.