Some movies are so bad they’re good, and some movies are just ... bad. My husband and I enjoy watching them both and I thought it would be fun to share the best of the worst. So without further ado, here’s my bad movie review of the week. I leave it up to you to decide whether the movie is bad, or just the review. ;-)

But that’s probably when my love for the creature features began. Two in particular stand out in my mind. There was one about a meteor that crashed on Earth, and when it got wet it grew. But then one of the heroes discovered that salt water would harm it, so they loaded up a reservoir with salt and then blew a dam to stop it. The other was the original Invaders From Mars where it begins with an alien craft landing in a sandpit during a storm. To this day I still don’t like walking on a beach or any other bare earth in the dark. :-)

I don’t recall seeing any of the classic horror movies during my Saturday afternoons, but at some point did see Frankenstein, Dracula, and one of my favorites, The Creature From the Black Lagoon. I never did see the original Mummy back then, although I have enjoyed the franchise staring Brendan Fraser. 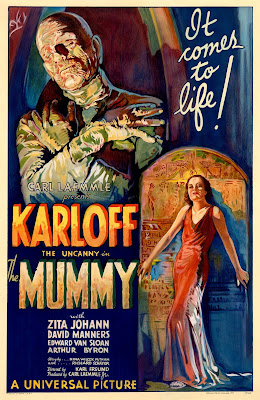 The 1932 version of The Mummy begins with the discovery of the mummy of Imhotep, a high priest, during an archeological expedition lead by Sir Joseph Whemple. They also found the Scroll of Thoth and when Sir Joseph’s assistant reads from it, he unwittingly brings the mummy back to life. When Sir Joseph returns, it’s to find both Imhotep and the scroll gone, and his assistant gibbering in a corner, quite mad.

Ten years later, Sir Joseph’s son Frank and Professor Pearson are at the same field office when they received a visit from an Egyptian named Ardath Bey, actually Imhotep, who tells them were to find the tomb of an Egyptian Princess named Ankh-es-en-amon. This is an amazing find, but of course they turn the whole works over to the Cairo Museum.

Once the princess is on display, Ardath Bey sneaks into the museum to visit the princess, whom he loved when he was alive. As he reads from the Scroll of Thoth, a young woman named Helen, the ward of Dr. Muller, an Egyptologist who was with Sir Joseph when he discovered the original mummy, is drawn to the museum. Joseph and Frank are just leaving and spot her trying to get into the closed museum. Naturally they take her back to their house.

Ardath Bey is caught by the security guard at the museum, and when he flees after killing the guard he forgets to take the scroll with him. Sir Joseph is called to the scene and is surprised to find the scroll, which he takes home with him. Meanwhile, Dr. Muller has arrived at the Whemple house where Helen is still lying semi-conscious on a chaise, murmuring the name Imhotep. When she awakens she’s confused, remembering nothing about what happened. Frank is immediately smitten with her, and she seems to return his feelings.

Leaving Frank to sit with Helen, Sir Joseph and Dr. Muller move into the study and talk about the original mummy, Imhotep. He would have been a priest when the princess was a Vestal Virgin, and they never did find out what happened to his mummy. Dr. Muller advises Sir Joseph to burn the scroll.

Frank leaves Helen resting and joins the others in the study just as Ardath Bey arrives at the house. He seems to hypnotize the servant who opens the door, and as he stands over Helen’s sleeping form, she awakens again, but she isn’t scared. In fact, she seems mesmerized by him. Dr. Muller asks Frank to take Helen back to the hotel - she’s acting a little loopy and at first she doesn’t want to go, but Frank convinces her.

Dr. Muller confronts Ardath Bey about the scroll and the mummy coming back to live. Ardath Bey demands the scroll back and leaves in a huff when they won’t give it to him. Once agin Dr. Muller advises Sir Joseph to burn the scroll, and then leaves to see to Helen.

This time Sir Joseph listens, but as he’s about to start the fire, Ardath Bey is watching through a scrying pool and uses magic to cause Sir Joseph to have a heart attack. As Sir Joseph dies, the servant takes the scroll out of the fireplace and takes it to Ardath Bey.

Later, we get a creepy close up of Ardath Bey’s eyes and the next thing you know, Helen is on her way to his place, dragging her very reluctant dog. She and Ardath Bey sit in front of the scrying pool and he shows her her past life as a Vestal Virgin, and how much he loved her. She sees him kneeling beside her as she lay dying and the big procession when they entomb her. Then how he stole the Scroll of Thoth so he could bring her back to life and got caught trying to cast the spell, and subsequently buried alive with the scroll.

He awakens her from her trance and she hears her dog cry out and goes to find him. She arrives home to find Frank waiting for her. At first she’s a little annoyed, but then she realizes she left her dog behind, because it was dead! Frank comforts her and professes his love. She’s really confused and afraid she’s turning into someone else. A nurse Dr. Muller had hired gives her something to help her sleep and Frank volunteers to keep watch until the doctor returns. He wraps a charm of protection he’d been carrying around the knob of her bedroom door.

Once he’s done that, Ardath Bey begins casting a spell to kill him. He manages to make it to the charm so that he only passes out instead of dying, and Helen walks right over him in her trance to go to Ardath Bey.

She awakens dressed in the clothes she wore as Ankh-es-en-amon, Ardath Bey beside her. They’re in the museum where he sets fire to the princess mummy, explaining that once it’s destroyed its soul will be free to enter Helen. They go into an embalming chamber where he tells her he’ll have to kill her and then bring her back to life as Ankh-es-en-amon. She’s not on board with this at all but Ardath Bey uses his magical mojo to make her more compliant.

Dr. Muller and Frank arrive as Ardath Bey is about to sacrifice Helen on the altar. They distract him and Helen wakes up. She remembers her past life and prays to a stature of Isis. Ardath Bey is using his magic to stop the men and Isis answers Helen’s prayer, burning the scroll which was Imhotep’s only link to the mortal plain. Frank saves Helen with his love. The end.

The great part about buying the DVD versus watching it on YouTube is the bonus features. Here’s some interesting facts I learned:
- the original story was not Egyptian but inspired by a story about Alessandro Cagliostro, an Italian occultist. The story was about a man 3,000 year old magician.
- Imhotep was a high priest of the temple of the Sun in Karnak
- the original name of the movie was Imhotep
- supposedly, the guy responsible for the mummy makeup studied Egyptian embalming methods
- the mummy makeup took longer than the makeup for Frankenstein
- because of the way the makeup was applied, it was painful to remove

This movie was a classic in every sense of the word. At its heart it was a story of eternal love. There were no CGI effects, and the black and white leant an atmospheric creepiness to Boris Karloff’s portrayal of the mummy. His eyes spoke volumes all by themselves. One of the things I found really interesting was how much of the original movie made it into the remake with Brendan Fraser, including naming one of the main characters Ardath Bey.

If you enjoyed the remake, I highly suggest you pick up your own copy of the original. Currently it’s available at Walmart for under $10.00.