mandarism ~ government with a large bureaucracy

If last week was rather dull, cold and damp, hot and damp, and depressing and damp, the weekend more than made up for it.

First of all ... remember all that flooding we had? Well in an effort to save the beach and/or the tourist season which traditionally kicks off on the Canada Day weekend, the Town of Cobourg had truck loads of sand brought in and dumped on what was left of our beach. After the heavy equipment finished spreading all that sand, we had a partial beach, at least down to the life guard towers.

Then it rained again

This is what the “beach” looked like on June 30 (Friday): 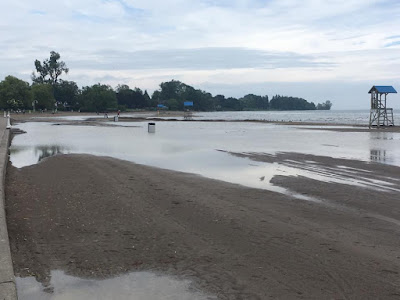 Well, that was certainly worth it, wasn’t it?

Despite the lack of beach, the weather was actually better than predicted. Friday was wet and miserable, but Saturday, which was supposed to be filled with thunderstorms and rain, was pretty hot and humid. Frankly I’d rather have a good honest rain than high humidity, but the sky was clear enough for the fireworks to celebrate Canada Day, and the water had actually receded enough that we could sit on the beach to watch them.

But even better than the fireworks was something we stumbled across on the way home. We passed a small group of people carrying large paper lanterns and torches, headed to a more secluded area of the beach. Once on the shore they fired up the flame sources inside the lanterns and once they were buoyant set them free to drift away.

That’s not an actual picture of what we saw, that’s just to give you an idea. But as awesome as it was to watch, I have to admit we had to wonder about the wisdom of letting the lanterns loose from this narrow stretch of beach. Between the tall trees and the houses so close to the shore, I think it was just dumb luck that nothing else caught fire.

I don’t usually check out the Waterfront Festival that’s held over the holiday weekend, but I did this year. The dampness didn’t seem to discourage attendance, it was pretty crowded when we were down there. And I don’t think the vendors had too much to complain about, business must have been good - even I bought something. 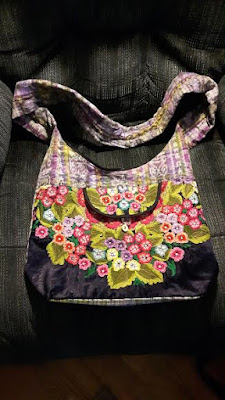 It’s my new writing bag. Big enough to hold note books, pens, and even my Alphasmart Neo. It’s from Guatemala and I was told it was made from material repurposed from native dresses. The embroidery is from the top part of the dress, the rest from the skirt. I’m not sure how much of the sales pitch I believe, but I’m going to enjoy using it.

Belated Happy Canada Day to my fellow Canadians, and an early Happy Fourth of July to my American friends. I’ll have to remember to dig out my Independence Day movies to watch on Tuesday in your honour. :-D