muriform ~ resembling a mouse or rat

Well folks, you dodged a bullet and don’t even realize it. LOL

When I started writing this post I was fresh from the news about the new doctor on the TV show Doctor Who. I’m not happy about their choice - I’m a die hard fan but they’ve changed the show so much I’m done with it. I was three rather lengthy paragraphs into a rant about it when I realized that in the grand scheme of things, who cares? It’s just a TV show.

After an unintended hiatus, my thrift store buddy and I were back shopping on Saturday. I bought things, she bought things, and we both agreed that if we didn’t stop bringing home so much “stuff” (it’s only junk when you’re getting rid of it) our hubbies might stop letting us play together. LOL

One of the things I bought on impulse was an incomplete set of dishes: 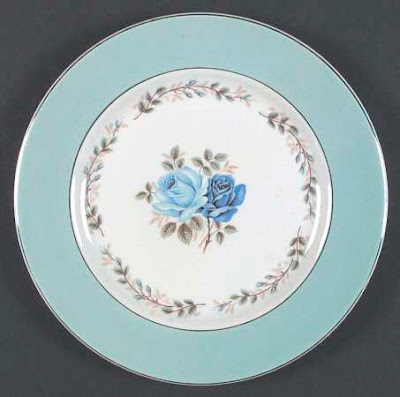 This is the Barratts Delphatic White Ironstone Blue Roses dinnerware. I got 33 pieces for $10, including enough dinner plates with cups and saucers to use for my immediate family. It also included a platter and two serving bowls, and a set of fruit nappies.

What makes it so special is pure nostalgia. Back in the sixties, my mother began collecting these dishes. I have a vague memory of her getting them as a free gift whenever she filled up her gas tank, not sure which gas station, but she also might have got them using green stamps. Anyone remember green stamps? Yeah, me neither. ;-)

Anywho, my mother collected these dishes piece by piece until she had a whole set. They weren’t her “good” dishes, but they weren’t every day dishes either. We would use them for Sunday dinner.

After mom died my oldest sister ended up with the entire set. I’m not sure how they’ve fared over the years or even if she uses them. I suspect her set is also incomplete at this point, if it still exists at all.

But I do know that going forward I’ll be using mine on Sundays, keeping the tradition alive.

Those are absolutely gorgeous - love that pattern! What a great find... :-)