Major Arcana of the Tarot - Part II
The Magician 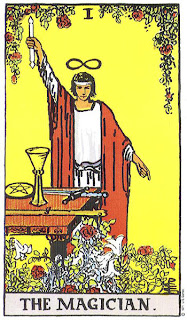 The Magician's number is one, the number of new beginnings. He is the ultimate achiever and is all about making better use of one's power. Through sheer will he achieves what seem to be miracles, which make his abilities appear magical. Associated with the planet Mercury, the Magician is a bridge between the spirit world and the world of humanity.

In early Tarot decks, the Magician was actually called the Juggler and was represented by a street performer or stage magician, sometimes depicted as a fairground hustler performing slight of hand tricks and illusions. This card was associated with Mercury, Thoth, and Loki and represented the human will.

In the early 1800's, however, an occultist by the name of Eliphas Levi designed a card that showed the Juggler holding one of the symbols from the Minor Arcana of the Tarot, with the rest laid out on a table in front of him. Paul Christian, a disciple of Levi's, renamed the Juggler the Magus, or Magician.

The Magician's right hand holds a staff pointed towards the sky, while his left hand points to the earth to form a connection between the two. Above his head is the symbol for eternity, while around his waist is a snake biting its own tail. The table in front of him holds the symbols for all four suits of the Tarot - Cups, Wands, Pentacles and Swords - which also represent the four elements. His robe is white, denoting innocence, but his cloak is red, reminding us of his humble beginnings.

The Magician card typically appears in a Tarot spread to show you that you have the creative power and energy to begin a new cycle in your life. It suggests you will soon be presented with a situation which will manifest your desires and you will be inspired to apply your skills and initiative to accomplish your goals.

If you're having problems, the Magician indicates that you will find a creative way to solve them. It's a good omen if you have a specific wish, when you're about to begin a project, or you need to make a transformation in your life. It's telling you that at this time you need to be focused on a single goal or purpose and to channel your energy towards this goal, eliminating any distractions.

The Magician is a powerful card, and a very positive one in a reading. It implies that at this time we have the power to make a difference in our lives. It's the perfect time to tap into your creativity. In the position of the past, this card emphasizes the talent you have used to get to where you are. In the present, it indicates the urgency of a situation that you need to take advantage of. In the future, it is an indication that your wishes are being granted through your hard work.

The Magician believes in himself and is not afraid to put that belief on the line. He knows what he wants to do and why he wants to do it. There's no hesitation because he understands the situation he's in. He can focus with a single-minded determination to accomplish his goals.

Hello! I've been following your web site for a while now and finally got the courage to go ahead and give you a shout out from Austin Texas! Just wanted to mention keep up the good job!

Feel free to surf to my web-site ... voyance