Major Arcana of the Tarot - Part III
The High Priestess 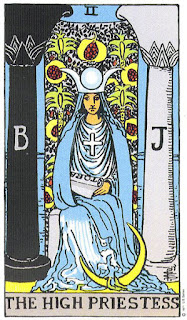 The High Priestess has also be known as Artemis, Persephone, Isis, or the Corn Maiden. This is a very spiritual card, tied to the moon, femininity, and inspiration. It can also have sexual overtones, indicating a phase where one is going to be much more physically attractive to others. The High Priestess is a guide to all things mysterious and mystical.

In the earliest known Tarot decks, this card was called La Papessa, or the Popess. She was depicted wearing a triregnum, or papal tiara, holding a sceptre with a cross in her right hand and a closed book in her left. Some believe her to be patterned after legend of Pope Joan, who disguised herself as a man to become elected to the papacy. However, other variants of the card associated the High Priestess with the Virgin Mary or Isis. In the Swiss Troccas decks she is called Junon, which is the Roman goddess Juno.

The most familiar depiction of the High Priest is from the Rider-Waite deck. It shows a woman in a blue robe seated between two pillars. There is a crown on her head and a crescent moon at her feet. On her chest is a cross and in her hands she holds a Torah scroll.

The crown on her head holds a pearl of wisdom and the cross and Torah show that this wisdom can only be found by using many traditions to guide you. The moon at the High Priestess's feet represents the unconscious mind as a primary influence.

Behind her is a tapestry with pomegranates on it. These link the High Priestess to the Greek goddess Persephone, who was forced to descend into the Underworld for six months of the year because she ate pomegranate seeds that were given her by Hades.

The High Priestess represents a link to the subconscious mind, which can only be accessed through dreams and symbols. She represents wisdom, serenity, knowledge, and understanding. She is telling you to trust your instincts and make sure you dig deep for all the information you need before making an important decision. She's here to urge you to talk to people whose experiences and beliefs are different from your own - time to move out of that comfort zone.

When the High Priestess appears in a Tarot reading, it means you need to pay more attention to your dreams. Listen to what your intuition is trying to tell you. There may be areas of your life that are out of balance and your intuitive sense is providing you with useful information. She will inspire you to be more creative, which makes this a good card for writers and poets.

When this card is reversed it can signify that you are not listening to your inner voice. Take some time for reflection or meditation. Listen to what your subconscious is trying to tell you. It suggests that you're normally an intuitive person, you've just lost your connection to your inner self.