Major Arcana of the Tarot - Part IV
The Empress 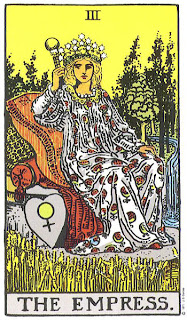 In the earliest known Tarot decks, the Empress is The Imperatrix, a powerful woman. She wears a crown and holds a sceptre, and her shield is emblazoned with the imperial eagle, identifying her as the Empress of the Holy Roman Empire. In some decks she appears to have wings and she holds an imperial orb instead of the shield. By the early twentieth century the emphasis had turned from her power and authority and more towards her creativity and fertility.

The Empress sits on a well padded chair or throne in a forest clearing amidst a field of grain. Her long flowing gown has pomegranates covering it, symbols of her abundance and fertility. On her head is a crown with the twelve stars of the Zodiac. Seven pearls surround her neck, representing the seven planets of the ancients. In her hand she holds a sceptre that is capped with a globe, a symbol of her dominance over things born and unborn. Against the side of her chair there leans a heart-shaped shield with the symbol for the planet Venus, ruler of love, art and beauty.

The Empress represents all the pagan goddesses of nature and fertility. She helps to renew, nurture, and build on ideas or projects that have already begun. This is a card of love and emotional experiences beyond the everyday. This is also a card of creativity, whether it be a work of art, the written word, or a musical score.

In relationships, there will be a great deal of love and affection. Lovers will feel a renewal of their bond. Expressions of generosity and kindness will abound. Those unattached will discover a new love interest that will come to mean more to them than they could ever imagine.

Being a card of love, The Empress brings wonderful influences and benefits. No matter what your current situation is, it can only be helped by the appearance of this card in your spread. While she can represent pregnancy or the birth of a child, she can also represent the creation or birth of a creative project.

On the other hand, she can also indicate that you, or a woman in your life, is being overprotective and may even resort to emotional blackmail to get what she wants, and that you need to handle your finances more carefully. She may also signify infertility or an unwanted pregnancy.

In the past, The Empress shows you have experienced some diva-like behavior that's caused problems in your interpersonal relationships. It may also indicate that you're someone who likes being taken care of. In the present position, it indicates that you're probably in a great mood, maybe even so satisfied with your life that you're getting a little bored.

In the future, this is a very good card indeed. It represents both wealth and happiness; it may indicate you're on the verge of becoming wealthy, or finding that special someone. Here's your happily ever after.