Major Arcana of the Tarot - Part V
the Hierophant 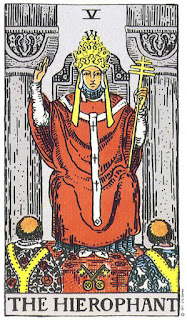 The Hierophant is a card about spirituality and doing the right thing. This is a time to play by the rules and doing what is expected of you. It's a good time to become involved with groups or to follow established social structures and traditions. This is not a good time to be marching to your own drummer or taking chances.

In the Rider-Waite deck, the Hierophant sits on a grey throne between two grey pillars. He is dressed in a red robe and a three tiered papal crown. In his left hand he holds as sceptre capped with a triple cross which symbolizes his dominion over the three worlds. His right hand is raised in benediction, the same hand that the Magician has raised.

At the Hierophant's feet are a pair of crossed keys representing the balance between the conscious and subconscious mind. These are the keys to heaven and hell and can unlock the mysteries. Because this is one of the teacher cards, he has a pair of students kneeling before him. One wears a robe with roses on it, indicating the path of passion and devotion, while the other wears a robe with lilies on it, indicating the path of renunciation. The tonsures on their heads show they have renounced their materialistic ideals. It is the Hierophant's task to bring these students into the church where they can take up their appointed roles.

According to the Merriam Webster's dictionary, Hierophant means: "The chief priest of the Eleusinian; expositor; advocate". The Eleusinian Mysteries were initiation ceremonies dating back to the Mycenean period and considered to be of the greatest importance. They were held in three phases, which leads us back to the three worlds the Hierophant has dominion over.

The Hierophant can represent those in your life who tend to preach or are rigid in their way of doing things. These people are afraid of any change that may weaken the community or family unit. It could also represent a warning against been too stubborn or fearful of change, especially in matters of theology. Or it could be a reminder that the purpose of traditions is to use them to keep the faith and spirit of a people alive, not just follow by rote.

When things are not going well, the Hierophant quiets the panic and offers good advice as well as spiritual assistance. He's the teacher, therapist, counselor, advisor, or spiritual leader who speaks for the people as well as to them.

When the card appears upright it suggests you need to seek guidance and follow positive advice. Do the right thing and keep the faith. It can also represent a person, a teacher or mentor, perhaps a spiritual or community leader. This person stands out as someone respected by others and is a source of moral authority.

If reversed, the Hierophant indicates a situation involving rebellion, heresy, and non-conformity. The person it represents is again a leader of some kind, but one who is opposed to tradition and conservative values, arousing aggression, fear, and violence. His teachings are flawed because he doesn't really know what he's talking about. He is often a cult leader.

When the Hierophant shows up in your past, it indicates a structured belief system and strong sense of cultural identity. In the present it shows you are following a new belief system or are ready to do so. This may result in the loss of some of your individuality, but it will be offset by the feeling of being part of something bigger.

The Hierophant is most powerful when shown in the future. There will be a strong pull towards someone who can explain the meaning of life, and your role in it, to you. This can be either good or bad, depending on the person you're drawn to. This is not so much a good or bad card as it is a card of wisdom.