Major Arcana of the Tarot - Part VII
The Chariot 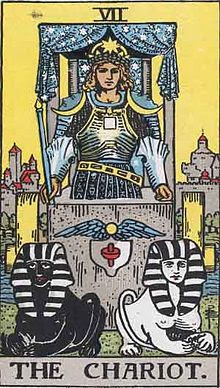 The Chariot is a card associated with both victory and control. It indicates a lot of energy, but this energy is controlled or directed towards a goal. When this card appears it means the goal is fairly clear, as are the methods to achieve it. The Chariot can also indicate a new influx of enthusiasm or inspiration to help get you moving towards that goal again.

Although it implies a war or struggle with an eventual hard-won victory, this could be an internal struggle. Unity of purpose is needed, along with control and confidence. A card of contradictions, the Chariot can indicate loyalty, faith and motivation that will lead to victory no matter what, but it can also indicate a ruthless desire to win at any cost.

In the earliest sets of the Tarot, The Chariot was called Lo Caro Triumphale (The Triumphal Car). In the Visconti-Sforza Tarot, the charioteer was actually a crowned woman seated in a large chariot drawn by two white, winged horses. The Chariot has been known The Centurion and Victory, and has been represented by an archer, by Thor, and by Ares. In the Thoth Tarot the driver controls four different animals which represent the four elements.

A.E. Waite depicted The Chariot as a king standing triumphant in his chariot, having just arrived from a great victory. He's wearing a suit of decorative armour. The crescent moons on his shoulders face outward towards the formative world. The square on his breastplate represents earth, a symbol of strength of will. A crown of laurels with a star on it sits on his head, representing the attainment of spiritual evolution. In his hand he carries a small scepter.

The canopy above him is covered with six-pointed stars, representing the celestial influences at work. The symbol of Ra (the winged sun) adorns the front of the chariot, beneath which is the lingam and yoni, symbols of male and female sexuality. The Chariot is being pulled by a black sphinx and a white one, representing the unsolvable riddle. The charioteer holds no reigns, just the wand to control them, making him the one who solved the riddle of the Sphinx.

The wheels of the chariot are shown resting on water, meaning strength comes from the subconscious. The rest of the chariot is on the land, a bridge between the conscious and unconscious. Behind The Chariot are the spires of a city, suggesting he may be venture out to a new conquest.

In general this card is about determination and ambition. It's the card of getting things done and proving yourself. Think of it as the sign you've been waiting for to move forward with your idea and give it your best shot. Do the best you can and don't worry about the way others might see your work. Take advantage of the energy you're feeling right now.

In the reversed position, The Chariot may be suggesting you feel you have a lack of control over your life. You may need to take back control of your destiny. Take a hard look at what you can and can not control in your life. Don't worry about the things over which you have no control, focus on the things you can control.

When The Chariot appears in the past, it's referring to past triumphs that led you to where you are today. In the present it shows you are experiencing that triumph right now. It could be something you've been waiting for, or perhaps something that's just been handed to you. You may even have mixed feelings about it if it brings about too many changes. If The Chariot shows up in your future, you can be assured that whatever your goal is, it's attainable. All you have to do is have confidence in yourself.