Marjor Arcana of the Tarot - Part VI
The Lovers 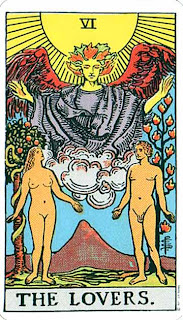 The sixth card of the Major Arcana is The Lovers. While it can represent relationships, this card is more about the choices you make than about love. It can indicate a moral or ethical crossroads has been reached and you must make a decision to follow your own path. It can also mean that a decision in a relationship must be made; perhaps a temptation must be faced or there's a choice of potential partners.

It's possible you are feeling ambivalent about a current relationship or situation. Your heart may be telling you one thing while your head tells you another. The thing to remember here is, always follow your heart.

Along with choice, The Lovers can mean a union, such as marriage, and commitment to choices you've already made. It can represent the forces that draw two people together in a relationship, although this is not always a romantic partnership.

Early Italian decks showed a man kissing a woman during a pageant or procession. In the Jean Noblet Tarot (1650), the card is depicted with a man standing between two women (usually a virgin and a temptress) in a typical love triangle while Cupid hovers above them with his arrow ready to fly. In the 18th century, Antoine Court de Gébelin included a caption, Marriage, which was interpreted as both choice and love. Other decks had a man meeting his mate with the help of a matchmaker.

In the Rider-Waite deck The Lovers are depicted by a naked couple. A tree of flame is shown behind the man while a fruit tree with a snake wrapped around it is shown behind the woman, leading us to believe this is Adam and Eve. There are five apples, representing the five senses, on the tree behind the woman, indicating the importance of sensual romance to her. The serpent wrapped around the tree reminds us of temptation and the fall of humanity from grace. The flames in the tree behind the man represent the flames of passion, the physical side of love.

The ground they stand upon is green and fertile and the mountain rising behind them is an obvious phallic symbol representing physical love. The sun shines overhead, bringing warmth and security. There is a cloud from which an angel is rising, hands raised in a benediction. He wears a robe of purple and has crimson wings; his hair has twelve flames, representing the twelve signs of the zodiac, and his face reflects the yellow sun.

While The Lovers is a powerful symbol for the union between two beings, caution is advised. Love is like a flame, it can ignite a blaze of passion, but it can also consume and destroy if used carelessly. Consideration for all the consequences should be taken before acting. When the card refers to a relationship, that relationship will be a perfect expression of love, usually (though not always) sexual. However, it can also be merely the integration of two warring parts of yourself. Once they're combined you will attain greater wisdom.

At times this card will indicate a moral crossroads. It could be as simple a fork in the road with two paths to choose between, or perhaps it will be a much more complicated decision that will test your strongest beliefs and ideals. The choice indicated by The Lovers is always on the moral or ethical plane. You will need to look inside yourself and trust your instincts. Once you have made your decision, you'll need to stick to your guns.

In a reading, this card signifies the importance of love in a person's life. It could be a new relationship, or a powerful re-affirmation of an old one. Don't be afraid to share your joy - life is wonderful.

When this card appears in your past, it indicates the basis of your current situation can be found in a loving relationship. It may be the foundation of your marriage, or perhaps the relationship you have with your children or parents. These relationships define you.

In the present, the card is telling you that if you are alone, it won't be for long. You might even know this person, but you will still be transformed by a partnership with them. The Lovers in the future position indicate that you need to be very positive about what you want in a relationship. Intense attraction may blind a couple to each other's faults.