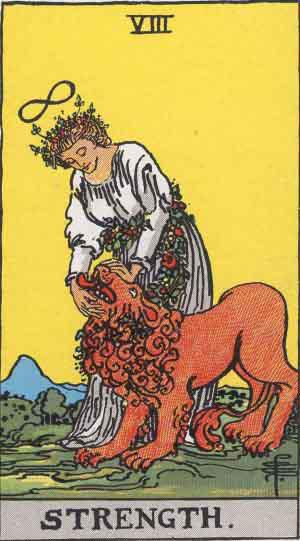 Although Strength was numbered XI in the Tarot in the early days (Justice being number VIII instead), it became number VIII in the Rider-Waite deck to fit better with the astrological sign of Leo associated with it, and most modern decks use this numbering. Either number is considered acceptable. This is the card of interaction between physical and emotional forces. It concerns inner strength, self-awareness, and self-control.

Strength was originally called Fortitude and indicated restraint in attitudes toward pain and danger. Neither pain nor danger was wanted, but neither could be avoided. There were two very different images for Fortitude: one was a woman with a stone pillar which she is either holding or breaking, and the other had and indistinct figure subduing a lion.

Crowley called this card Lust, and focused on the sun sign of Leo, which indicated sexuality, creativity and intuition. The Vikings Tarot depicted Thor trying to lift the Midgard Serpent while the Mythic Tarot used Hercules to represent Strength. The Rider-Waite deck merged the original two images to illustrate this card.

In most decks you will find Strength depicted by a woman in a white robe holding or stroking the head of a lion who stands beside her. The white of her robes indicate her purity and innocence, as does her floral crown. Over her head floats the infinity symbol, almost like a halo. It's the symbol of energy and thought, as well as possibility and self-mastery.

The belt of red roses she wears wraps around the lion's neck as well. She has overcome the lion with inner strength, rather than physical strength. Her left arm, which rests on the lion's head, represents intellectual effort while the right, which holds the lion's head in place, represents physical effort.

The lion is traditionally a sun symbol of our animal passions and desires. This lion is gazing up at her adoringly, tail between his legs, and is licking her hand. He has been successfully subdued, indicating mastery of these baser instincts. The use of a woman to illustrate this card is an indication that we're not just talking about physical strength here. The woman gazes down at him with a peaceful look on her face, in total control of her emotions.

In general, Strength tells us we are in full control of our animal nature, and that patience and gentleness with gain us more than brute strength. It represents determination and the inner strength to overcome any difficulty. Gentle persuasion and acceptance will win others over to your way of thinking. The qualities represented by this card are already in you, you just have to conquer your fears and let them out. You need to find the confidence within yourself to do this. Results may be slow, but if you hold your own you will get a great deal accomplished.

However, when Strength is reversed it represents weakness. Perhaps you've recently experienced a setback or you've begun to doubt yourself. Your inner strength and courage are lacking. You've been giving in to your impulses and baser instincts and shown a lack of self-control. Bullying won't solve your problems. There's a lack of self-confidence indicated and a need to face reality. You need to reconnect with your self-confidence and give your self-esteem a boost.

When Strength appears in a spread, it can indicate that you're facing a challenge that requires an intellectual response rather than brute force. When it appears in the past, it shows the basis of the situation you find yourself in currently. You're reaping the benefits of your patience and expertise.

In the present position, it shows you are in control of your own place in the world. This is not a domineering control, but rather one wielded with understanding and cooperation. Although you are most definitely in charge, others do your bidding because you've created a pleasing work environment and made it worth their while.

Strength in the future indicates that whatever is bothering you in life will not do so for long. You will soon bring it under control. Use your inner peace and self-confidence and you can master any challenge.