Marjor Arcana of the Tarot - Part X
The Wheel of Fortune 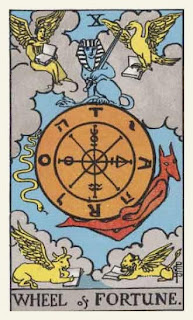 Number ten of the Major Arcana, The Wheel of Fortune, is one of the most auspicious cards in the deck. It generally means that unexpected good fortune is coming your way. But as with everything in life, sometimes this good fortune is a matter of perspective. You might need to take a close look at this unexpected event to see the good in it. The benefit might not seem obvious at first, but as the wheel turns the positive influences will be revealed.

This is a card of luck and change. But it's also a reminder that for every action there is an equal reaction, so be careful of what you do and how it will affect those around you. By doing so you just might reap a greater reward for yourself.

In the earliest known Tarot decks this card was known as La Rotta, the Wheel and has a figure at the centre of the wheel, surrounded by four figures. By the 15th century this figure was identified as the goddess Fortuna and the card is the Rota Fortunae. The card generally showed a human dressed in an Egyptian-style headdress and there were people sitting or riding on the wheel.

The Visconti-Sforza deck has Fortuna, blindfolded and winged, turning the spokes of a large wheel clockwise. At the top is a monarch with donkey ears, symbolizing his foolishness. In the Rosenwald deck the wheel turns counter-clockwise and the figure shown is that of an animal, while in the Cary deck the wheel has a handle to control it. In the Tarot de Marseille there is no human figure, just animals dressed in skirts and capes crawling over the wheel.

Most of the modern decks take the Rider-Waite deck as standard. The wheel itself is a symbol of the natural flow of energy. Because it spins, the wheel shows the changing cycles - good to bad, life to death, rags to riches. The blue background represents wisdom.

The outer circle of the wheel represents the material world. The eight spokes represent not only universal energy, but the eight Sabbats of the year. The letters T-A-R-O, which can be interpreted as either Tarot (if you return to where you start) or Tora, alternate with the Hebrew letters of the unpronounceable name of God. You will also find the symbols for the four elements: earth, air, fire and water.

Rising up the right side of the wheel, in what seems to be a counter-clockwise movement, is a red human-like figure with the head of a dog, a symbol of the ascending wisdom of our shadow side. The snake descending the left side represents the descent into the material world and is the Egyptian god Typhon, the god of evil who tempted Adam. The blue sphinx on the top of the disc holds a sword and represents life's riddles.

The Wheel of Fortune is a card of destiny. It represents an unexpected change that can be so gradual as to go unnoticed. The change will be major, and will either be of great benefit or cause great problems for the person in question. The wheel means movement, rising and falling, as a person's fortunes can rise and fall. Though the changes brought about by this card are unexpected, they're usually changes for the better.

In a Tarot spread, this card can indicate major breakthroughs . Things tend to go in cycles. Even if things seem bad right now the time is coming when this will change. Look for new opportunities or ideas. You need to accept the ups and downs of life; what comes around goes around. You need to take an active part to remain on the up side of the Wheel, so don't become discouraged when you're faced with misfortune. No matter which way the Wheel turns, it's impossible to try and change it - you need to go with the flow.

When reversed, the Wheel of Fortune indicates things are out of sync. There could be conflicts of interest making this a good time to consider other options. Luck is not on your side at this time. There are negative forces in play that you have no control over. It can also indicate that you're resistant to change, particularly if the change is not of your choosing.

In the past position, this card indicates big changes in your life that are the foundation for where you are now. In the present it's a card of good luck. Fate is smiling on you. In the future position this card is a reminder that all things change. Nothing lasts forever.