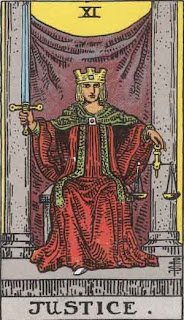 The eleventh card of the Major Arcana is Justice. Its prime message is that of accountability, of taking responsibility for your own actions. We make choices every day that help shape us into who we are. Justice encourages us to be honest with ourselves in all things. While it doesn't always represent legal issues, when it does it is a positive sign.

Justice deals with the laws of cause and effect. That is not to say that everything you are dealing with is the result of your own actions. Sometimes you need to deal with things that result from the actions of someone close to you, which can be just as hard. This is not a card about good versus bad, right versus wrong, or punishment. It's more about adjustment, so that the scales end up equal.

Early Justice cards appeared as number eight in the deck, taking the place of the Strength card to show that justice can be greater than power. It showed the familiar image of a woman holding a sword in one hand and a pair of scales in the other. The image was usually modelled after the Roman goddess Justitia or the Greek goddess Themis and wore a golden crown, while above her was a knight with a drawn sword who delivered justice to the world.

Justice is often associated with Athena, goddess of wisdom , who not only provided the idea of justice, but provided a model as well. It is also associated with Maàt, the Egyptian goddess of justice, who also often appeared on this card. In the Tarot de Marseille, Justice is seated and grasps an upright sword in one hand, and a slightly out of balance set of scales in the other. The Rider-Waite deck shows her appearance as similar to that of the High Priestess. She is seated on a throne between two pillars with a hanging veil in the background.

When the goddess Justisia is shown, she is usually blindfolded. But on the Tarot card Justice, she has no blindfold, showing that we must face our trials with our eyes wide open. Justice is wearing the red robes of a servant to the people, and sits on a plain stone seat. The crown she wears is a symbol of her authority and the small square on it represents her well-ordered thoughts. The square of the clasp on her cloak represents the law that protects the circle within it.

In her right hand she holds a double-edged sword that cuts both ways, signifying impartiality. It is held point up, signifying victory, and can cut quickly to the heart of the matter. In her left hand she holds a set of scales to show that logic must be balanced by intuition. The scales themselves represent opposing arguments, the two sides to every story, and the balance between the present and the future. The purple cloth draped in the background is for compassion while the grey pillars show the constraints of the physical world.

In its most basic form, the Justice card represents fairness, truth, and the law. As a final outcome to a spread it signifies that the fairest decision will be made. There will be a balanced judgement. This could refer to a legal matter you are a part of, and if so you can expect that justice will be served. You may be called to account for your actions and be judged accordingly.

The scales of Justice are balanced, which means things will work out as they were meant to be. What happens will come from the decisions you have made and the actions you have taken in the past. Justice is a search for truth, not only within yourself but in others as well. This is a time to be objective when dealing with people and basing your judgement on facts, not rumours. You need to play fair and ignore those who are only trying to stir things up.

When Justice appears reversed in a spread it generally means that you are avoiding taking responsibility for your actions and trying to blame others for your mistakes. You are where you are because of your past choices and have no one to blame but yourself. If you can look back and honestly say you couldn't have chosen a different path, then you might need to look deeper to find your way out of your present circumstances. Stopping judging yourself, and others. The world is not just black and white. You may need to bend the rules a little to get back on course, but do so in a way that is fair to everyone or the karma may come back on you.

When Justice appears in your past, it's showing that the basis of a situation you find yourself in now can be traced back to a decision you made some time ago. This choice was the beginning of a turning point in your life. It's not a judgement as to whether this was a good or a bad choice, only you can decide that, it merely clarifies that this was the choice you made among all the others offered to you at the time.

In the present position, Justice represents a decision you are facing now. It could be something personal, legal, or even something to do with a job or education. This decision is a crucial one, so weigh your options carefully. When this card appears in your future, it indicates that you may have a big decision to make soon. This may be a result of a many little decisions you've been making recently, and they will culminate in big changes.