Major Arcana of the Tarot - Part XVI
The Tower 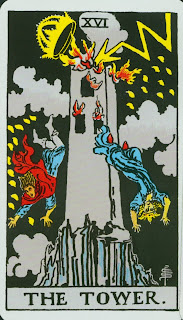 The sixteenth card of the Major Arcana of the Tarot is The Tower. It's an unsettling card, even to look at, usually representing a sudden, dramatic upheaval or reversal of fortune. The change in circumstances can be gradual, giving you time to adapt, or it may be swift and explosive.

A sudden crisis is life's way of telling you to wake up. Something is wrong and you're not dealing with it. Are you stuck in a rut? Then you may be in for a surprise. Bottling up your anger? Expect the dam to let go. Maybe you're too full of pride? Then expect a blow to your ego.

But it's how you respond to the change The Tower brings that makes the difference in how the experience will affect you. You need to understand that the disturbance occurred because it was needed. And if embracing the change is too difficult, at least try to find the positive in it. You may even reach a new level of understanding or feel a tremendous release.

The Jacques Vieville Tarot (17th century), calls this card La Fouldre (Lightning) and shows fire falling to earth from a celestial body with debris in the sky, but instead of a tower, a man is shown standing close to a tree with his cattle. The Tarot of Paris, on the other hand, shows an image of the Devil beating a drum in front of what appears to be the mouth of Hell. The Belgian Tarot from the same century shows a tree being struck by lightning while a Flemish deck by Vandenborre renames it Le Foudre (The Thunderbolt) and shows a shepherd cowering under a burning tree that's been split by a bolt of lightning while sheep graze at its base.

The Minchiate Tarot, shows an image of two nude or scantily clad people fleeing through the open door of a burning building. The Tarot de Marseille calls this card La Maison Dieu (The House of God). It shows a tower standing erect in a hilly landscape. It has been blasted open at the top by tongues of fire from heaven and the sky is filled with brightly coloured balls. Two men, smiling slightly, are falling from the building. The Rider-Waite deck is based on this image, with small tongues of fire in the shape of the Hebrew yod letter replacing the balls.

The Tower sits atop a craggy mountain, representing ambition built on false premises. It represents a basic foundation of the past while the lightning striking it at the top represents intense and unexpected change. The tower is struck only at the top, signifying a clean break from the past.

The crown that is dislodged from the top of the tower symbolizes the end of an era. There are twenty-two flames in the sky, representing the twenty-two cards of the Major Arcana. Grey clouds of misfortune surround the tower, raining down on everyone randomly.

Two figures are seen falling from the tower, one with and one without a crown to illustrate that sudden calamity can happen without regard to wealth or status. These figures represent a head-first escape from the past and a sudden immersion into the immediate future. They symbolize frustrated plans, abandoned enterprises, and ruined ambitions.

The Tower is about changes, and you need to roll with the changes you're about to undergo. Things or people you've counted on may no longer be there in the same way. But this will only be a problem if you let it be. Trying to prevent change is like trying to row upstream without a paddle. You have all the resources inside you to deal with what you need to do.

The energy at this time will be of the more negative kind. You need to keep your temper under control . It could be that a relationship is about to end. Don't make assumptions about this, communicate with your partner to clear the air.

When The Tower comes up in a Tarot reading it's an indication of a time of great turmoil. An experience has shaken the foundation of your sense of security and forces you to question your belief system and behaviour. This experience will affect you profoundly - spiritually, mentally, and physically. This is a major upheaval, one that is likely to leave chaos in its wake.

But it's important to remember that with destruction comes creation. It is truth and honesty that come like a bolt of lightning from an impactful life event. It represents an important experience that forces you to leave your comfort zone in order to grow.

When The Tower appears in the past position, it indicates that whatever upheaval you're about to experience is rooted in your past. It could be an old argument about to start up again or maybe something that you've been putting off. Whatever it is, it's about to resurface.

In the present position, The Tower can take just about any form. The chaos about to be unleashed could involve relationships, work, finances . . . but whatever it is, it usually only affects one area of your life - thoroughly. The Tower in the future position indicates that you can see the change coming and it will be coming fast. The future is imminent.