Major Arcana of the Tarot - Part XVII
The Star 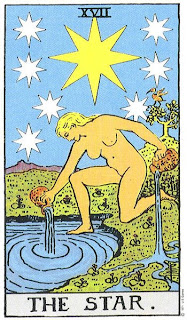 Number seventeen of the Major Arcana is The Star, often considered a card of hope. It embraces the same optimism as when we look up at the stars in the night sky. It's a message to take heart, be at peace, and know all is well. It suggests a clarity of insight and vision, and reassurance that we can trust in the future. It offers a glimpse into what is to come, but it is up to you to decide if you're willing to go after it.

In the Tarot de Marseille (15th century), L’Étoile (The Star) shows a nude woman pouring water from two vases. The water on her left goes into a pond, and water from the right onto the ground. There are two trees in the background with the silhouette of a bird and a large star, surrounded by six smaller ones, shines in the sky. Some decks call this card The Astronomer or The Navigator, and in the Flemish Deck it is shown with an astronomer seated in the left corner with a tower in the right corner. He is using a divider to look above at a large star surrounded by smaller stars.

The Visconti-Sforza Tarot illustrates this card with a woman with blank expression on her face, looking at a large, eight-pointed star held in her left hand. She wears a red cloak that is adorned with golden stars and a long, blue dress with a motif of horizontal rays on top of vertical rays. The Rosenwald deck (16th century) is even more simple, showing an eight-pointed star with a motif at the top and bottom of the card. The Cary deck, however, shows an much more detailed image. A nude figure pours water from two large jugs into a flowing stream in which the tail of at least one fish is visible. The figure has long hair and a tattoo of a star on his/her right shoulder. A large, eight-pointed star shines brightly in the sky and is surrounded by four smaller stars.

In the Rider-Waite deck, The Star shows a naked woman kneeling at the edge of a small pool. She is holding two pitchers from which she is pouring water and above her is a large star with seven smaller ones around it. Her nakedness is a symbol of her ease - she has nothing to fear or hide and she is ready to face the world as she is without any artifice. With the pitcher in her right had she pours water into the pond to continue the cycle of fertility, while with the pitcher in her left hand she pours water onto the land in five rivulets representing the five senses. She has one foot on the ground, symbolizing her practical nature and common sense, and one foot in the water, symbolizing her intuition.

The pool of water represents the universal subconscious mind while the land represents the material world. The woman renews them both. The clear blue of the sky is a symbol of inspiration and creativity. On a small rise behind the woman is a bird in a tree. It's widely believed this bird is the sacred ibis of thought, a symbol of the Egyptian god Thoth, and the tree it's roosting in is the tree of the mind. The Star is numbered seventeen in the Major Arcana, which in numerology equals eight (1+7=8). There are eight, eight-pointed stars on this card, one for each of the eight planets.

This is a card of personal transformation, but you need to be open to new ideas. Listen to the voice within yourself. You are making some significant changes to rediscover your purpose in life. The card also indicates that you have a generous spirit. You have an open heart that's willing to share with others to help them transform their own lives. There is a need in you to pay it forwards and give back to others.

You may have been going through a rough time, but The Star gives you hope for the future. You're on the right path and things will work out. Better days are ahead. It may not happen overnight, but help is out there. If you've been worried about a situation, you can lay those fears to rest. You're able to forgive and forget so that you can move on. The Star brings with it a sense of renewed hope and faith that you are truly blessed at this time.

In readings, The Star often shows up in our darkest moments, when grief and despair have overwhelmed us. It's a message that there's light at the end of that long, dark tunnel. But while The Star is inspiring, it doesn't hold all the answers. It's there to let you know that you're on the right track, and that you have to take action yourself to find that peace of mind you're in need of.

When The Star appears in the past position in a Tarot reading, it indicates that a good idea you've had in the past began a series of events that have led to your present circumstances. If The Star appears in your present, it means you're on the verge of making big plans. Perhaps you're ready for your life to take a different turn, or you wish to make a contribution that will benefit everyone. In the future position, The Star advises you to keep hope alive. Whatever your current crisis is, you will figure out a solution to it. All you need to do is take a chance.