Major Arcana of the Tarot - Part XVIII
The Moon 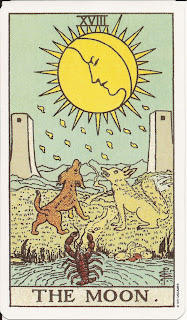 Number eighteen of the Major Arcana is The Moon, the card of intuition, dreams, and the unconscious. This is the card of dark depresssions and manic charm, of frenzied behavior and wicked mood swings, of artists and writers and musicians; of the lunatics whose art, poetry and music are pure magic. It is also the card of the land of dreams or hallucinations, the place where seers and sages find their vision. It is the wild card of the Tarot. It's light is only a reflection of the sun, but it is strong enough for us to find our way towards a higher state of consciousness.

In the Visconti-Sforza Tarot, this card shows a woman with bare feet wearing a long red dress with a blue dress underneath. She's holding a crescent moon in her right hand while she plays with the cords around her waist with her left hand. The Rosenwald Tarot is more simplistic, depicting a large moon with a face that has human traits.

The Cary deck is the first to show a crustacean rising from a pool of water that is nestled between two hills with a tower on top of each hill. Like the Rosenwald deck, the moon in the sky above has a face. The Tarot de Marseille shows the crustacean as well, with the towers on hills on either side of the pool. Again the moon has a face, and it is shedding twenty-two drops. Below it are crouched two dogs.

The Flemish deck shows a woman sitting on the right hand side, holding a distaff in her right hand and spinning thread with her left. On the left hand side of the card there is a tree and the moon is directly above her. One of the old Italian decks shows the moon shining in through a window while an Astrologer plots a horoscope, while the Mythic Tarot depicts the moon in the form of a goddess, either Artemis, Selene or Hecate.

The Rider-Waite Tarot shows The Moon as being very close to that of the Tarot de Marseille. A crustacean is crawling out of the water, although in this case the towers on either side are not nearly as well defined, nor are they on hills. There is a path that runs between them, however, leading to the horizon. There is a dog on one side of the path and a wolf on the other. Both appear to be howling at the moon, which is looking down on them with a somewhat stern expression.

The light that gently illuminates this card is a symbol of the soul that no longer reaches us directly, but is lit only by reflection, as the moon reflects the light of the sun. The face of the moon gazes on the scene below while dew drops of thought fall. The pool at the base of the card represents the subconscious mind from which is emerging a crayfish, which is a symbol of hidden psychic power. This speaks of coming out of the dark or out of hiding. The crayfish crawls up from the muddy depths of the subconscious, believing there has to be something more to its world, and into the conscious.

The dog, with its tamed instincts, symbolizes the way our mind has been tamed, while the wolf, representing our animal nature, symbolizes our primal urges. Neither is all good or all bad but they war with each other in our minds - one is barking at us to do the right thing while the other growls for us to break away from our set patterns. There is a path that separates them, leading to the horizon. What's at the end of the path is unknown, a mystery. Only by overcoming this fear of the unknown will the mystery be revealed. Both the dog barking and the wolf howling are expressions of lunacy or madness, advising us that it would be madness to set off down this path, yet it is the only way out. The only other option would be to return to the water, like the crayfish, submerging ourselves into the subconscious again.

The towers, aside from being phallic symbols that appeal to our primitive natures, represent the stagnation that comes with the easy route. They stand on either side of the path and promise riches, comfort, and safety, but this would be settling for less than we deserve and if we build our lives on these false illusions they will come crashing down on us.

The face of the moon on this card is in profile, indicating that we're only seeing half the surface. Many things can seem somewhat confusing now. You are more psychic or intuitive than usual, and you will need to trust your instincts, even if you don't know where they're coming from. Not everything is what it seems and if you feel that you can't trust something or someone, then you probably can't. Go with your gut feeling.

The light of the Moon is all about visions and illusions, astonishing creativity, powerful magic, and poetry. But the dark side indicates hidden enemies, mental illness, and substance abuse with accompanying blackouts. When this card appears it may mean you've been going through a particularly difficult time emotionally. You may be dreaming excessively or experiencing nightmares. Instead of losing yourself in this dream imagery, try to give it form through one of the creative arts - painting, writing, music. This card indicates that you're in touch with visions and insight, creativity and psychic powers.

If the other cards in a reading which features the Moon are more negative than positive, then you must guard against deception. Open your eyes to see what's really going on, the Moon might be showing you her hidden face and things might not be what they seem.

Often the Moon will appear in a reading when you're unsure of where you're going or even of the path you're on. You may feel like you've lost your way. You need to let go of your conscious mental blocks and let your intuition guide you. Your dreams and instincts will lead you forward to a higher level of consciousness.

When this card appears reversed it indicates a lack of progress because of deep rooted fears or anxieties. There may be a deep-seated unhappiness with your present circumstances or confusion over what you really want to do. These emotional issues will prevent you from moving forward if you don't face your fears to re-gain your self-confidence and sense of direction. You need to believe in yourself.

It can also warn of lies and deceit, or maybe just a misunderstanding. Don't be deceived by false promises or let your imagination run wild. You may have experienced a period of self-deception and fear, but this is starting to subside. You are beginning to work through your issues and are becoming less anxious about your situation.

When The Moon shows up in the past position you need to look for a recent period of confusion that is to blame for your current troubles. Maybe you had an inspiration that manifested itself into some artistic form of expression that helped you cope, the Moon inspiring you to find order amidst the chaos. You can look back on this time with satisfaction, knowing you made the best you could out of the circumstances.

If The Moon appears in your present you could be experiencing a period of deep confusion. You may be tempted to escape from reality through substance abuse, meaningless sex, gambling, or other hollow pursuits. But this is a chance for you to better yourself by ignoring these temptations and following a path of your own choosing, one of your own imagination and design.

In the future position, this card can be an indication that you will wander away from what you thought was important in your life and follow a different path altogether. This might signal a spiritual awakening or following a new vocation. If you are in one of the creative fields, expect a rush of inspiration to fill you. Your new muse awaits.

The moon is said to say the nature of life which we will get in our current situation. It is said to have more power than other tarot cards.