It's finally, irrevocably spring! And do you know how I know? The sign has gone up for the annual St. Peter's book sale. LOL

And another thing. Remember all that indoor gardening I did last week? And remember the gourd seeds I planted? Much to my surprise, one of them actually sprouted: 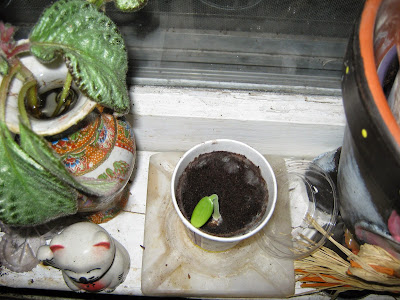 Isn't he cute? Now I'm going to have to find a bigger pot for him.

My "following a list" experiment has been having mixed results so far. I've faithfully made out a list every day (except Thursday) and even managed to check off most of the tasks on those lists. Some tasks appear on a list two or three days in a row before I get to them, like the taxes, but eventually everything gets done. I start with the same four tasks on my list each day: reading, writing, exercise, and crafting. I consider it a good day if I've been able to check them all off.

Surprisingly, the task that's been giving me the most trouble is reading. You'd think finding a half hour to read each day would be easy, but trust me, it's not. And not surprisingly, the one that's been easiest to find time for is crafts. Again, it's supposed to be a half hour minimum, which is pretty darned easy when I craft while watching TV at night.

I tried working on my sweater last week, but messed up the pattern big time. I had to frog it back several rows, which was a right pain in the butt. The main part of the sweater is a lacy stitch (that's not actually part of the pattern) and there's an intricate cable running up both sides, which made frogging it . . . interesting.

So I set the knitting aside and picked up my crochet hook. When I was crocheting the catghan I promised Dante an afghan of his own, so I worked on it instead: 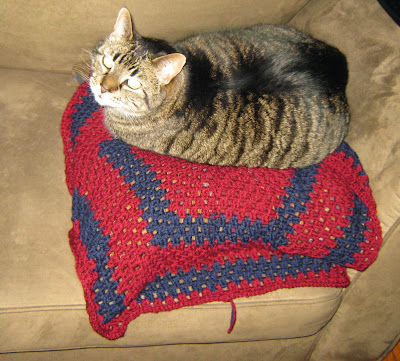 It's actually a hexagon shape, done all in one piece. What? You've never made anything for a pet before? Shame on you! LOL I had so much fun with the shape that I've started another throw. This one will be made up of green hexagons. Right now I'm just going to keep crocheting until I run out of yarn, and then lay them out to see if I have enough for a throw. If not, I just might have to buy some more yarn. ;-)

My big project for the weekend were the taxes. Have I mentioned how much I hate taxes? Whoever invented them should be shot. However, the taxes are done and filed. Whew! It's great to have that monkey off my back!

Are you on Goodreads? If so, don't forget to enter for a chance to win one of three paperback copies of An Elemental Water.

Congrats again on getting those taxes done! Woot! And Dante looks very happy with his own "catghan".

And hooray for spring too! About dang time, eh?

I have been sorely missing my crafting time lately...time to get back to it! Hopefully this week...

The only reason Dante is lying on the afghan I made him is because I put it on his pillow. He actually doesn't seem too keen on it, the little ingrate. I think he's holding out for an abstract cats one. LOL