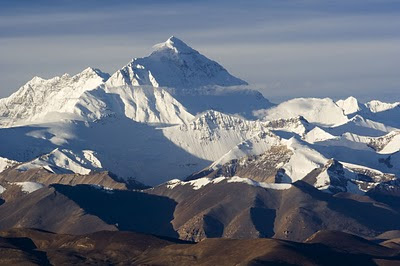 The tallest mountain in the world, Mount Everest lies in the Himalayan mountain range along the border of Nepal and Tibet. It was first named Peak XV by Sir George Everest, who was the first to record its location in 1841. After his dead, in 1865, it was renamed Everest in his honour. In Tibet the mountain is called Chomolungma (mother goddess of the universe) and in Nepal it’s called Sagarmatha (goddess of the sky).

While doing my research for this wonder, I came across many interesting facts:
The height of Everest is 29,029 feet (8,848 metres)
Shifting tectonic plates continue to push Everest upward at 1.6 to 3.9 inches (4 to 10 centimeters) per year.
The first people to successfully climb Everest were Edmund Hillary of New Zealand, and Tenzing Norgay of Nepal in May of 1953.
The first woman to climb Everest was Junko Tabei of Japan.
The temperature of Everest at the summit is typically 100°F below zero.
If you want to climb Everest, you must pay the Nepalese government $25,000 for a climbing permit.
As of 2009, more than 4,000 ascents to the summit have been made by over 3,000 people.
A typical expedition will last about two months with the first month being a gradual acclimatization to the cold and thinner air.
There are a total of 18 different routes up Mount Everest but the most popular is the Southeast Ridge. 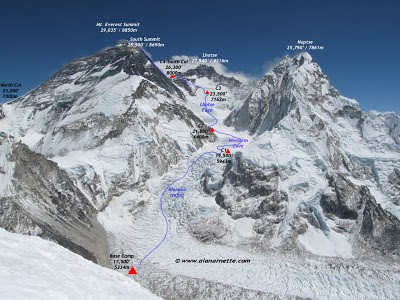 And if you'd like to see what it's like to stand on the summit of Mount Everest without having to climb it first, check out this panoramic view
at 8:00 AM