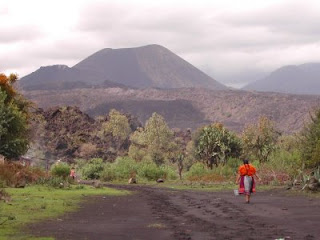 Although it’s not surprising to find a volcano listed under the Wonders of the Natural World, I had to do a little digging to find out why this particular volcano was listed:

The eruption of the Paricutin scoria cone from 1943 to 1952 marks the first time scientists were able to observe the complete life cycle of a volcano, from birth to extinction. Geologists from many parts of the world came to study this extraordinary volcanic event. The knowledge gained by these scientists greatly expanded our understanding of volcanism in general, and of scoria-cone formation in particular. ~ How Volcanoes Work

Paricutin is situated about 200 miles west of Mexico City, in the state of Michoacán, Mexico. It’s a cone volcano that grew out of a corn field. The type of eruption which happened at Paricutin is called a Strombolian eruption, which means it gushed basaltic lava, and exploded from a single vent. The worst of Paricutin's volcanic activity, took place in 1943, with its lava rising to about 50 feet below the crater's rim. Nearly 1000 people died following one of its last major eruptions in 1949.

“Strombolian pyroclastic activity began at the fissure on the day it was discovered by Dionisio Pulido. Within 24 hours the eruption had generated a 50-m-high scoria cone. Within a week, it had grown to a height of 100 m from the accumulation of bombs and lapilli, and finer fragments of ash were raining down on the village of Paricutin. The eruption became more powerful in March, generating eruptive columns several kilometers high. Occassionally, the volcano would exhibit vulcanian-type activity, with large canon-like explosions separated by short periods of silence. On June 12, a lobe of lava began to advance toward Paricutin village and people began to evacuate the village the following day. The larger village of San Juan Parangaricutiro was evacuated a few months later. By August 1944, most of the villages of Paricutin and San Juan were covered in lava and ash. All that remained of San Juan were two church towers that stood above a sea of rugged lava.

The Paricutin eruption was unusually long for a strombolian eruption, with several eruptive phases occurring over a 9-year period. After about two years of mostly pyroclastic activity the pyroclastic phase began to wane, and the outpouring of lava from the base of the cone became the dominant mode of eruption over the next 7 years. Although no people died directly from the eruption, three people died after being struck by lightning generated by the pyroclastic eruptions. The eruption ceased in 1952. The final height of the scoria cone was 424 m.” ~ From: How Volcanoes Work

Today the volcano stands 1,345 feet high, which is 9,210 feet above sea level. You can see Paricutin by taking the 12 mile round trip journey to the top of the volcano. Most people make the journey by hiking or on horseback. Along the way you will see the lava fields, buried homes, and the remains of the church of San Juan.