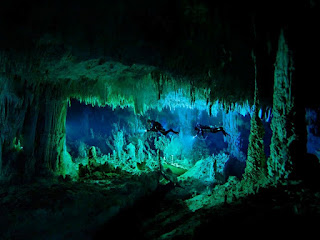 
“I don’t know about this, Billy . . .” Josie looked up from the book of local legends she’d been reading. “It says here—”

“Babe, I’ve already put down a deposit on the scuba gear.”

“Have you read this?” she asked, waving the book at him.

He plucked the book out of her hand and tossed it aside. “It’s just a bunch of crap to give ignorant tourists a thrill.”

“Then why can’t we hire a local boat owner to take us there? Why did they refuse to even rent us one of their boats when they found out where we wanted to go?”

“C’mon, babe,” Billy said. He pulled her to her feet and wrapped his arms around her. “There’s nothing to worry about. You know it, I know it, hell even the locals know it. They’re probably just trying to hide something really spectacular down there. Maybe there’s an old shipwreck that nobody’s found yet, with a fortune on board.”

She pulled away enough to look up at him. “You really think so?”

Josie gave a sigh, and with that one little sigh Billy knew he’d won. “Get your stuff and let’s get going.” He turned her around and gave her a swat on her behind. “The boat I hired from the next town should be here by now.”

Josie picked up her beach bag and followed her boyfriend down to the docks where they had no trouble picking out the shiny white cabin cruiser from amongst all the fishing boats and catamarans docked there.

Even going to the next town over Billy had trouble finding a boat to hire. However, this guy was new to the area, although he knew the cove they wanted to dive in.

“Don’t get many people wanting to dive in the Devil’s Cove,” he said as he made ready to cast off. “I think the name puts them off.”

He and Billy ignored the mutterings and warding signs the locals made, but Josie felt a shiver run up her spine.

“All the better,” Billy said. “Means it hasn’t been picked over too badly.”

They cast off and made their way out of the harbour, reaching their destination in a little more than an hour. The Devil’s Cove was a small, almost perfectly shaped horse shoe of a cove, surrounded by high cliffs of black rock.

Josie could feel the boatman’s eyes on her as she shimmied into her wetsuit, and it was almost enough to take her mind off of what was waiting for them below those deceptively calm, turquoise waters.

She gave her equipment one last check and then nodded. Everything in place, they dove.

Josie felt a calmness overcome her as the ocean closed over her head. It was always the same. She loved diving. There was just something so peaceful about it. She and Billy had met during a diving class – he’d been her instructor – and they’d been together ever since. Cave diving was their favourite, and despite her initial apprehension she felt the same thrill of excitement that always accompanied the prospect of a new underwater cave.

The water was only slightly murky and she was able to follow Billy easily. At least until they came to the first cave. The short passage led to a much wider chamber, but that seemed to be all the cave had to offer. They swung their lights in a wide arc but the cave was almost disappointing in its ordinariness. Billy shook his head at her and turned around to lead the way out again.

The next cave, though pretty with its plants and fish and filigree coral, was also not the famous Devil’s Mouth. The third, however . . . Josie shivered as they entered the wide passage. The place gave her the creeps, although she couldn’t have said why.

The further into the cave they went, the worse the feeling of apprehension. At one point they passed a spot that looked like teeth coming from both above and below and Josie almost turned back then. It really was like entering an enormous mouth.

Billy had turned on his video camera and filmed their entry into the cave. Josie tapped his shoulder and pointed towards the wall where her light illuminated formations that looked almost human.

It was tempting to keep going but they had no way of knowing how far back the cave went and their time was growing short. They’d need to leave it for another day when they could bring sleds with them. Now that they knew the passage was wide enough to accommodate them it would be no problem.

They turned and began retracing their route back out of the cave. They came to the spot with the teeth-like formation only to find a dead end. Josie turned terrified eyes to Billy and her breath left in an explosion of bubbles.

The following day a group of locals went out to check the Devil’s Bay. They were more concerned over the fate of the abandoned cruiser than they were over the people who had been in it. The boat owner wasn’t one of them and therefore didn’t matter. As for the tourists, well, they’d been warned, hadn’t they? The devil must be given his due. And better strangers than one of them.
at 1:36 PM

Fascinating read. I found myself pulled in right away and then the story didn't let me go til the end.

Carol, well that gave me the heebie jeebies. I will be having nightmares tonight. Good job!