murenger ~ official in charge of ensuring city walls are repaired

I don’t know about you all, but I had a fabulous weekend! This was the weekend of my husband’s year end bowling tournament – a two-day tournament in Hamilton. I’m not a bowler (and I have a collection of bad bowler trophies to prove it) but I am a shopper. And Hamilton has one thing our little town does not have – Lime Ridge Mall.

Lime Ridge is apparently the largest mall in the city. You can see for yourself HERE. Anyway, a few years ago one of the other bowling wives and I started a tradition of shopping while the boys are bowling. We like to refer to the weekend as the Shopping Tournament. :-D

Here’s a picture of the loot I came home with: 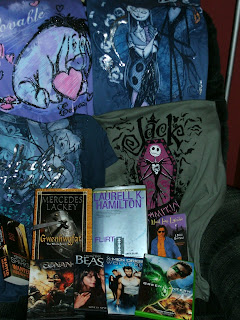 Hmmm, it appears I was doing things in fours. Four t-shirts from the Disney Store: Eeyore, Tinkerbell, and two Jack the Pumpkin King. Four books: Wanted, Undead or Alive, by Kerrelyn Sparks; Gwenhwyfar, by Mercedes Lackey; Flirt, by Laurell K. Hamilton; and Must Love Lycans, by Michele Bardsley. Four DVDs: the new Conan, Beastly, Wolverine, and Green Lantern. Not shown is the set of DVDs I bought for the hubby for Father's Day. :-)

Good thing the Shopping Tournament only comes once a year. I don’t think either my feet or my wallet could take it more often. LOL The only downside of the weekend was all the e-mails I didn’t get answered which I will have to do today. *sigh* Oh, and the screaming children at the restaurant we were at Saturday night. Parents! If your child cannot behave in public, don’t freakin’ take them to an adult restaurant. Take them to MacDonald’s or Chuck E. Cheese or something kid friendly!

I must be on a roll. Again I got all my posts up and most of them were even on time. My poetry post was just a little late, and my flash piece wasn’t as late as it normally is. One of these days I might even be back to having it done on time.

Even though I haven’t changed them on my blogs yet, I have been updating my Reading Challenge page and my What I’m Working On page. I keep meaning to update them on the blogs when I schedule my blog posts, but I keep forgetting. I’ve changed the Working page to reflect the stuff I’m actually working on right now – this probably won’t change again until the end of June when the big transcription project I’ve been working on is finished. I’ve also changed the Reading list by linking the book titles to a review, if I’ve done one.

Again I didn’t get my Goodreads list updated, but I’ve been keeping track and I’m going to really make the effort this week (again). I’ve got a thousand and one excuses, if you’re interested. :-)


What’s Up This Week: The schedule is up on the side bar, so I’m just giving the highlights here.

Tuesday On Random Thoughts We have Part Eleven of Prophets and Prophecies, Erik Jan Hanussen, Hitler’s Jewish psychic. On Random Writings there will once again be a book review and it will probably be one I read earlier in the year ‘cause I’ve been buying more than reading lately.

Wednesday (on Random Writings) Chapter Fifty-two of Shades of Errol Flynn. I’m going to leave it as a surprise as to what’s going to happen because every time I think I know, the characters do something completely different. And on Random Thoughts there’ll be another hump day hunk for your viewing pleasure. ;-)

Thursday we have Chapter Seventeen of Water (on Random Thoughts). I think Ravi’s tespiro has just about run its course, but what about Nereida?

Friday On Passion For Poetry (Random Writings) I will probably post a few more of my early poems. And on Random Thoughts I’ll be doing another flash piece, prompted by a picture.
at 8:00 AM