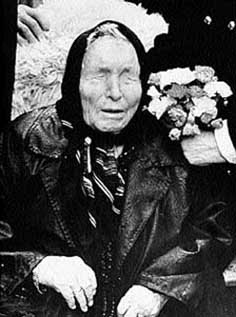 Vangelia Pandeva Dimitrova was born in Bulgaria in 1911, a premature baby who suffered from health complications. In accordance with local tradition, she was not given a name until it was deemed likely she would survive. At that point the midwife went into the street and asked a stranger for a name. The stranger suggested Vangelia, a Greek name meaning herald of the good news.

She grew up as an ordinary child in a small village in the Kozhuh mountains. One of her favourite games was to play “healing,” where one of her friends would pretend to be ill and she would prescribe herbs to them.

It is believed, though never proven, that when she was twelve she was swept up by a wind storm and thrown down again. When she was found her eyes were covered with sand and dust and she was unable to open them. Her family being poor, there was no money for an operation and she eventually went blind.

Vanga claimed that her extraordinary abilities came from invisible creatures, but she couldn't clearly explain their origin. She believed these creatures gave her information about people, which she could not transmit to them, because distance and time didn't matter.

In 1942 Vanga married Dimitar Gushterov, who had come asking for information about the killers of his brother. Before she would tell him anything he had to promise her not to seek revenge. Vanga never allowed anybody to seek revenge. She believed that a man is born to do good and that no bad thing ever remains unpunished.

During World War II Vanga attracted more believers–a number of people visited her, hoping to get a hint about whether their relatives were alive, or seeking for the place where they died.

She would act as a medium, communicating with the spirits of dead people from up to 200 years in the past, and claimed to have healing powers. She would often prescribe herbs and spices to cure diseases and ailments, but she said that people had to heal themselves only with the herbs from the country they live in. She did not oppose modern medicine, but she thought that taking too much medicine was bad because it would interfere with the body restoring its natural balance.

Baba Vanga is also known in the U.F.O. community for claims that she speaks with an Alien race named the Vamfim. She claimed they have been living on our world for many years and are here to help. They were from the were from the third planet, or realm, from Earth, another dimensions of Mars.

Those who have studied Baba Vanga’s predictions say that she was accurate about 80% of the time. There are those who dispute this claim, however, because she was only semi-literate and her predictions were written down by those around her.

Baba Vanga died on 11 August 1996 from breast cancer. Her funeral attracted large crowds, including many dignitaries. Her followers believe she knew the precise date of her own death, and shortly before that she had said that a 10-year-old blind girl living in France would inherit her gift

She was not afraid of the death, because according to her “after death the body decomposes, like everything alive, but a part of the body – the soul, or something I don’t know how to call it, does not decompose. You talk about second birth. I do not know what it is. But what remains from a man - it’s the soul. It does not decompose, and continues to develop to reach higher states. This is the eternity of soul.”

Fulfilling Vanga's last will and testament, her house was turned into a museum, which opened its doors on 5 May 2008.

Baba Vanga is believed to have predicted the break-up of the Soviet Union, the Chernobyl disaster, the death of Princess Diana, and the date of Stalin's death. Over the years, she was visited by many political leaders, including Adolph Hitler. Her prediction:
"Horror, horror! The American brethren will fall after being attacked by the steel birds. The wolves will be howling in a bush, and innocent blood will be gushing." Is believed to refer to the 9/11 tragedy. The brethren are the twin towers and the steel birds are the jets.

The following are some prophecies for the next 50 years.

2014 - Most of the people in this world will have skin cancer and skin related diseases. (Due to radioactive showers in the Northern Hemisphere and a chemical war started by the Muslins against the Europeans, predicted for 2011).
2016 - Europe is almost empty
2018 - China becomes the new world power.
2023 - Earth’s orbit will change slightly
2025 - Europe is still barely populated
2028 - Development of a new energy source. (Probably controller thermonuclear reaction) Hunger slowly stops being a problem. Piloted spaceship to Venus deploys.
2033 - Polar ice caps melt. World ocean levels rise.
2043: Economy is good. The Muslims will run Europe.
2046: All bodily organs can be reproduced, becoming the easiest and most popular method of treatment.
2066: The U.S. uses a new climate-changing weapon on Muslim controlled Rome.
2076: Communism takes over.

If you would like to see more of Baba Vanga’s prophecies, I recommend THIS SITE
at 8:00 AM