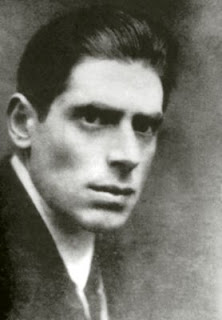 Erik Jan Hanussen was born on June 2, 1889 in Vienna. His real name was Hermann Steinschneider and though he claimed to be a Danish aristocrat, he was in fact a Moravian Jew.

He left home at an early age to join the circus, where he became a skilled knife thrower, fire eater, and strong man. During World War I when Hanussen’s company was cut off from its water supply, he was able to dowse for water without the use of a dowsing rod. Eventually his charisma and entertainment background got him a transfer as a performer for the troops.

When the war was over, he continued to develop his stage act as a clairvoyant, muscle reader and mentalist. By 1930 Hanussen was well known as “Europe’s Greatest Clairvoyant.” He began publishing a weekly journal of the occult, and a biweekly paper that made predictions regarding politics and national finances. In one stunning prediction, he said that one of Germany’s three largest joint-stock banks would suffer a collapse. The prediction was fulfilled three weeks later when Darmstadt & National was forced to close its doors. He much sought after and was always in demand in a variety of venues.

Hanussen became a multimillionaire in Germany. He held lavish feasts aboard his yacht that included drugs. One of his specialties was his ability to hypnotize women into sexual frenzy and sustained orgasm. A Swedish baroness, Barbara van Swieten, often hosted these events and sometimes acted as a willing participant. Even for a Berlin accustomed to debauched night-time displays, Hanussen’s were considered over the top.

He became friends with many of the Nazi elite. Some sources believe it was Hanussen who suggested the Indian symbol of good luck, the swastika, as the Nazi symbol. In his periodicals he predicted Hitler had planetary conjunctions in his favour and was a rising star. In 1932 he predicted that Hitler would be appointed chancellor in one year’s time.

It is believed that Hanussen aided Hitler in his public speaking by applying his stage background, coaching him in his gestures, teaching him how to emphasize phrases and adding drama to his speeches. He helped Hitler develop his phenomenal appeal that allowed him to lead his country to war.

Hitler did not know Hanussen was Jewish. Hanussen told everyone he was the son of an aristocratic Danish family, and he was believed, even though he didn’t speak a word of the language.

By 1933 Hitler was chancellor of Germany and Hanussen grew over confident. He predicted the burning of a great building and that from its ashes would spring hope. On February 27, 1933, Germany’s parliamentary building caught fire. The Nazis blamed it on Communists and public outrage gave Hitler the chance to pass emergency laws that put him in the seat of power.

It was actually the Nazis themselves that set fire to the building, to give Hitler the opportunity to acquire complete control. Hanussen would have known this, which is how he was able to make his prediction. This was unacceptable to the Nazis, however, and on March 24, 1933 he was murdered.
at 8:00 AM