As I mentioned in Monday's post, I got a new printer last week. And as I may also have mentioned, I want to turn the closet in my office, which I currently call my printing alcove, into a reading nook. If you need/want to take a closer look, just click on the picture to make it bigger. Here's a picture of how things looked when I started: 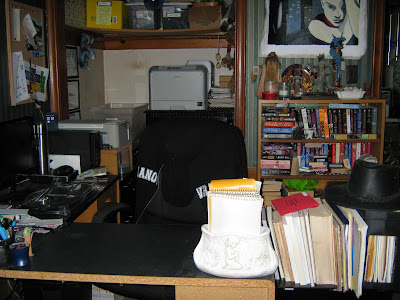 At the back of the closet is the black cabinet I keep my office supplies in, and sitting on top of it is an incredibly heavy colour laser printer. With a bunch of junk piled beside it. To the left of this is a small desk, on top of which is a plastic bin the cats like to sleep in, and in front of that is my old ink jet printer.

The first step in creating my reading nook is to clear out the furniture. See that bookcase against the wall behind my desk? That's where the black cabinet needed to go. My first task was to clear everything off the book case that wasn't a book (i.e. breakable). Because I have laminate flooring in my office, it was easy to just slide the bookcase to where I wanted it, which in this case was in front of my desk. What's not shown in the picture is the chair that used to be in that spot. 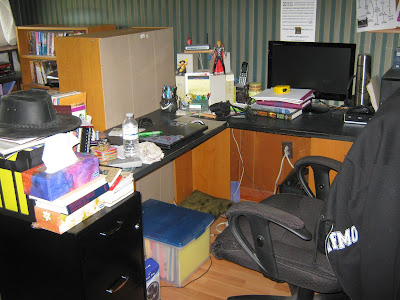 Not exactly inspiring, is it? The bookcase is too tall to really "fit" there. And too narrow. And it just looks out of place. And yes, that is a pillow under my desk for a cat to sleep on.

Now . . . many, many years ago, when I had far fewer books, my husband (who can be pretty handy when he wants to be) made me a pair of bookcases for the office I had at the time, which was across the hall from the one I have now. One was for paperback books and one was for hardbacks. The beauty of these bookcases is there is very little wasted space as they are only seven inches deep, about half the depth of commercial bookcases.

Like I said, though, this was years ago. The paperback bookcase is in the dining room now and is slowing filling with CDs. And it's covered in plants. The hardback one ended up upstairs in the guest room. This bookcase is wider than the one I tried in front of my desk, but it is shorter and less deep.

Of course the first thing one must do before moving bookcases up and down stairs, is unload all the books out of them: 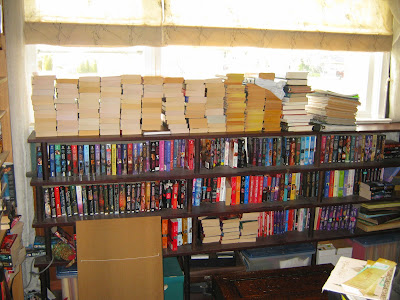 Here's the picture of the new bookcase in front of my desk, filled with all the books from the old one: 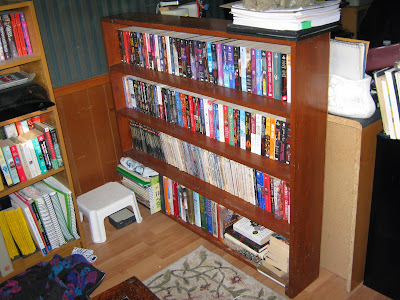 Alrighty then. The bookcase situation was taken care of. Next was moving the black cabinet into place on the wall where the bookcase was. My hubby took care of the laser printer (and by take care of I mean he risked life and limb by moving it into the room across the hall). So then I unloaded the bottom half of the cabinet (which was 90% paper) and it should have been a simple matter of sliding the cabinet into place, right? Wrong: 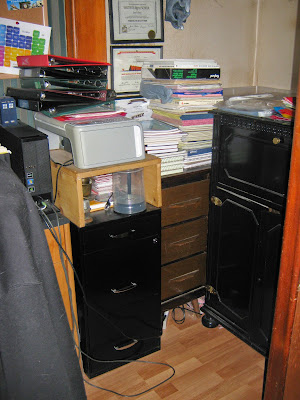 I hope you're impressed by the stack of paper products on the desk and the pile of binders on top of the ink jet printer. And I might point out that that wasn't the entire contents of that black cabinet. ;-)

It took most of the day, but finally the black cabinet was in place and I could unpack my new printer. The picture really doesn't do it justice. And you can't really see it clearly, but there's a cat in that plastic bin on the desk that's still in the closet. It's not the usual cat though, this one is Taz, the patriarch of my cat family. Usually it's Julius in there, but he doesn't like change so he hasn't been in my office since Friday. 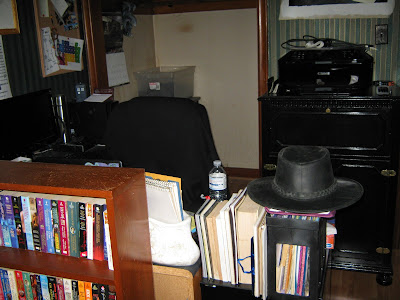 And today I spent considerable time cleaning up my desk area so I could take a picture of what my work space looks like now. 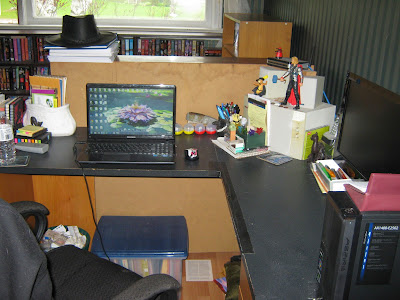 Be impressed while you can, I'm sure it won't look like this for long. But the nice thing about the bookcase in front of my desk - it hides the mess on the other side. There's a box of stuff for charity, a box of books I'm getting rid of, and various other assorted "things" that don't have a home yet. There was also a big box of paper that did not go back into the storage cabinet, and that's all finding a new home with my artistic writing buddy who has grandkids that can use it for drawing on or writing on or whatever their little hearts desire. :-)

The next step in the nook process will be getting rid of the desk in the closet (sorry Taz!), unloading the stuff on the shelf in the top, and then we can commence with the building of shelves.