madarosis ~ loss of eyelashes or eyebrows

How was everyone's weekend? Even if you're not a mother yourself, you probably have one and I hope you showed her a little appreciation because after all, if it weren't for her you wouldn't be sitting here reading this.

I had my Mother's Day on Saturday. My daughter and I had a day together of shopping and talking and drinking Chai Frappuccinos. She introduced me to Greek food for lunch and then we hit Chapters, which for you non-Canadians is a humungous bookstore. The selection was a little overwhelming, but we managed to spend a buck or two there. ;-)

Speaking of mothers . . . Remember my ducky friends, Daphne and Donald? Apparently they're going to be parents. A neighbour startled them when she went to throw something into the big cement fireplace she has at the back of her yard. They flew off, leaving their eight eggs behind, but they've since come back and I've seen Daphne still consorting with the drakes that have been hanging around our pool.

For those of you who're curious (or not, as the case may be,LOL), I thought you might want an update on my little gourd seedling: 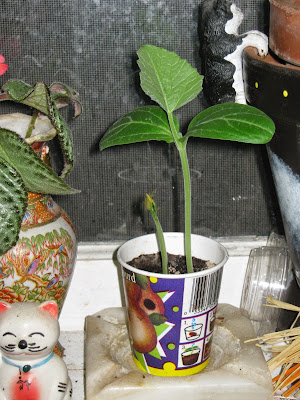 As you can see, not only is it flourishing in its tiny little pot, I have a second one sprouting as well. I really must get those planted in a bigger pot. It's still a bit too chilly for them to be outside on their own - we've even debated about leaving my deck plant outside at night. My deck plant is a beautiful pot of red, yellow, and orange petunias and I'd hate to lose them to the cold. However, petunias are generally cold tolerant, so cross your fingers for me.

If the word for the previous week was struggle, the word for this past week would have to be difficult. You know, I started out trying to be optimistic, but gave up around Wednesday. Wednesday was another one of those days where I didn't bother to make out a list because I had a lot on the go. I had an appointment in the morning, so I decided since I'd have the car anyway I might as well move my lunch date from Thursday to Wednesday. It worked out well for both of us. We had lunch, we had tea, we got some writing done in the tea shop . . . . It wasn't until later that it hit the fan.

I'm sure no one wants the gory details, but whatever I was hit with late Wednesday night lasted well into Thursday. But there are two good things about it. One, I was able to spend most of the day reading (unlike the previous weekend where I wasn't even able to do that); and two, I see my doctor tomorrow and I'm not leaving until we come up with a plan for dealing with it. I lost three out of seven days to health issues last week, and life is just too short for this crap.

So this week I've got some catching up to do. I made some foolish promise about posting two installments of Earth this week (to make up for the one I missed), so the first one will be up tomorrow. *knock wood*

The writing of it will be a tad tricky, time-wise because when I made that promise I totally forgot that the hubby and I will be going out of town today to see when his hip over-haul will be. However, I may not be able to use that time for writing, but I'll bet I can sneak some reading in while we're in the waiting room. ;-)

I ran out of the green yarn I was using to crochet hexagons on the weekend, so I'm hoping we have time to make a pit stop at Michael's so I can get some more. This started out to be another scrap afghan, but I really like the greens so now I'm thinking of staying with those shades and making it a throw for my book nook.

In the meantime, because I fall asleep if I have to sit in front of the TV without anything to do (and no, I can't write in front of the TV - it's too distracting) I've started a round, ripple crochet afghan using a fuzzy, variegated orange and white yarn I got from my mother-in-law. I've just gotten to the part where it starts to ripple, so I'll post a picture of it when I'm a little further along. I have to check my stash, but I think I might have some white that matches that yarn so maybe I'll throw in the odd white stripe as well.

Are you on Goodreads? There's only a few days left to enter the giveaway for one of three paperback copies of An Elemental Water.

You gotta enter to win. So enter now, and good luck to you!

Are you sick and tired from searching for bitcoin faucets?
Double your claiming speed with this amazing BITCOIN FAUCET ROTATOR.

You should remember that the ultimate Bitcoin exchange company is YoBit.