Are your ears pierced? 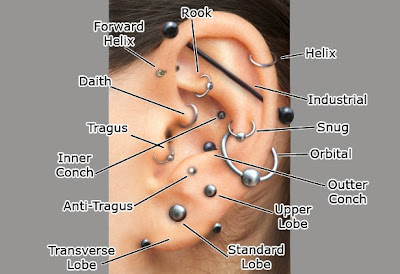 I was sitting at my desk procrastinating working and found a pair of earrings in a small dish of jewelry and on a whim I put them in the pierced holes in my ears. It's been a while I've had earrings in so I had to work at it a bit, and I had to wonder when I got out of the habit of wearing earrings. I have a great collection of earrings - I used to really love them, the funkier the better. Now weeks can go by before I remember to put them in.

Getting your ears pierced was a really big deal when I was a teenager. My father refused to give me permission (which meant he wouldn't pay for it) so I ended up going to the doctor to get them done. This was many years ago and the studs the doctor used looked like Frankenstein bolts. When the healing period was over, my father had to use two pairs of pliers to get them out. I had these tiny gold hoops called "keepers" ready, but try as I might, I could not get those suckers in. I'd start feeding one into the new hole in my ear, but instead of going through to the other side it'd go down into my ear lobe.

Nevertheless, I survived, and the holes in my ears survived to this day. The second time I got my ears pierced was many years later. This time I went to a hair salon and the studs that were used were much prettier than the previous ones. But pretty is as pretty does, and these ones kept getting infected. I received a set of gold studs as a gift and discovered that these were the only earrings the new piercings would tolerate. So naturally I lost one of them.

Despite the fact I keep forgetting to wear earrings, I've never regretted getting my ears pierced. But I've also never had the urge to get anything else pierced. Have you seen the things people have been getting pierced these days? Go ahead and put "piercing images" into a Google search. I double-dog dare you!

And what about the people who put the plugs in their ears? I believe it's called gauging. It's where a series of progressing larger rings are inserted into the ear lobe to stretch it to however large you want the hole in your lobe. Some of them are huge! And I'd seen it done on the face as well, right below the lower lip so you can actually see the person's teeth in their mouth. And speaking of mouths . . . when did it become fashionable to have your tongue split?

I'm not even going to go into all the crap that can be inserted under your skin to give you a three-dimensional tattoo or horns on your head. Be brave, check out This Link to see a few examples of what I'm talking about.

What were these people thinking?

I actually have 6 or 7 holes in my left ear and a couple in my right. When I was in college, the entire outer edge of my left ear was covered in metal...and yes, I slept on them. It was a "thing". LOL I actually didn't take them all out until I cut my hair around age 25 or 26 (it looked better with long hair than short).

Now I'm boring...I just use my first two piercings, and wear the same earrings pretty much all the time because I'm too lazy to change them (or rather, I'm always running late in the morning).

I did, for a little while, have another part of my body pierced. And you have to be a really good friend for me to tell you where. Or catch me in a really good mood, anyways. ;-)

Guess I must be a really good friend, 'cause I know where. :-P

Or maybe I just caught you in that good mood. LOL