multilocation ~ appearance in many places simultaneously

I mentioned to my buddy Jamie that I seem to be busier on the weekends than I am during the week. Which is odd, really, because I have more time to do things during the week.

But I think the reason for this is that I'm a right slacker during the week, which means I have to scramble to get all the things I've been putting off done over the course of the weekend. You know, so I don't feel like a right slacker. ;-) 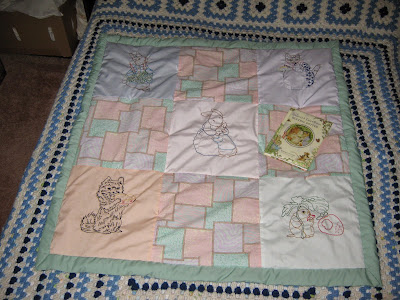 As you can see, it's a Beatrix Potter themed quilt, and I took illustrations from the book in the picture for the embroidered squares.

The risers are in the reading nook, and I finally made the cushion for the seat. I believe I mentioned before that other than the strapping for the shelves, all the materials that went into building the nook were recycled. That goes for the cushion as well. The material is some I've had sitting around for ages, but the foam I used for padding came from a foam mattress pad we used to have on our bed. Several weeks ago we got a new mattress, so we didn't need the foam any more.

There's no picture yet 'cause I'm waiting until I get more books in the nook.

Tomorrow I'll be up at oh dark hundred to drive the hubby to the Belleville hospital where he will be having his hip replaced. So I'm going to be taking the rest of the week off as far as blogging goes.

I'm not sure how much time I'll be spending there - there's no set hours for visitors at the hospital, but a great deal of hubby's time after his surgery will be spend in physio-therapy. I'm assuming I'll be spending a big chunk of my day cheering him on though.

So have a good week everyone, and I'll see you next week.