I noticed on Saturday that I had a lot document files sitting on the screen of my laptop, so I decided it was time to back them up. I’ve been a little slack in the backing up department lately. So I pulled out my trusty USB key – actually I pulled out five of them – and realized they were utterly disorganized. So . . . I set about organizing them. This will be the subject of a special post on Thursday (on Random Writings).

One of these keys is just for my writing and it occurred to me that not all of my writing was backed up onto it. I had a bunch of document files still on floppy disks (that’s the 3 ½ inch floppies). So I fired up my ancient computer (which sounds like a lawnmower when you turn it on) because it has a working A drive. Then I spent the next few hours transferring files from 60 (yes, that’s right 60!) floppy disks onto a USB key. And the sad part? It was a 2 gig key and I still had a gig of space left when I was finished. Boy how times have changed!

Pictured below is my box of disks and the USB key I copied the files onto in front of the box. And yes, that is a sonic screwdriver to the right of them, with a Grumpy mug behind it. :-) 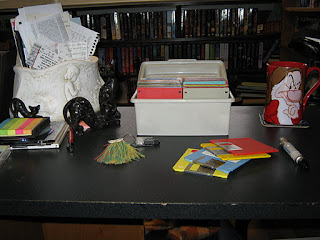 Anyway, one of my projects for the coming week(s) will be going through these files and organizing them. I took a look at a few of my old writing files and found a really cool idea I had for a contemporary novel written in three points of view. Who knows what other treasures I may find?

Other than the reading I did for my editing, I only read one book last week, Mercenaries by Angela Knight. Yummy!

My posts all got written last week, although my instalment for Shades went up much later than I expected. I don’t know what happened there, but it was a real struggle to get it written. I’ve really got to try and start these things earlier in the week.

I actually confused myself last week, which led to a series of late nights. Tuesday I was thinking about the post I had to write for Wednesday, but I kept thinking it was supposed to be the instalment for Water. So, when I finally got a chance to get writing, it took my mind a while to adjust to writing the instalment for Shades. Then Wednesday I was thinking about my posts for Thursday and I forgot that I moved my poetry to Fridays, so I got my poetry post done before I started working on Water, which made for another late night. At least that meant I was ahead of the game on Thursday night. :-)

What’s Up This Week:
The schedule is up on the side bar, so I’m just giving the highlights here.

TuesdayMore blog posts and website suggestions to keep you out of trouble.

Wednesday (on Random Writings) is the next instalment for Shades, in which hopefully Jessica figures out what to do next. And don’t forget the Hump Day Hunk (on Random Thoughts).

Thursday will be Chapter Three of Water (on Random Thoughts) where we find out what’s the matter with Nereida. And On Random Writings I’ll be doing a post on the importance of taking your time when backing up.

Friday I keep forgetting to set up some poet interviews, so you’re stuck with more of my poetry on Random Writings. On Random Thoughts it’s Flash Me Friday and I’ll probably be doing another picture prompt.
at 8:00 AM